Rahal, who fields race teams in INDYCAR, IMSA and Jaguar I-PACE eTROPHY Series, was honored by the International Motor Racing Research Center (IMRRC) for his outstanding commitment to the sport of auto racing. This was the sixth year the Steuben glass trophy has been presented. Previous honorees were Chip Ganassi, Richard Petty, Roger Penske, Mario Andretti and Jim France and the France Family.

Rahal, who served on the board of the IMRRC from 2015-2018, was presented the award by J.C. Argetsinger, former president of the IMRRC and one of nine children of the late Cameron and Jean Argetsinger. 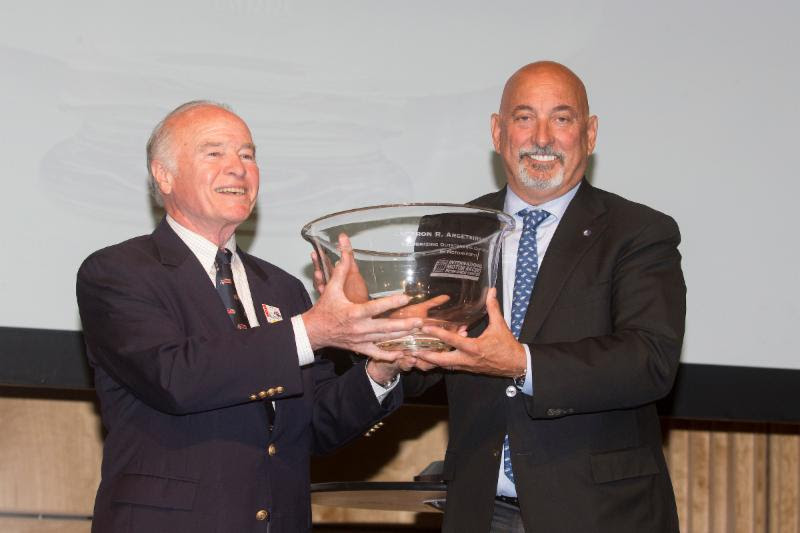 “About a decade ago we were so fortunate that Bobby Rahal, a great ambassador for the sport, lent his prestige and his energy, and joined our board,” said Argetsinger. “And then [there was] the excitement when he became our chairman. His contribution was truly enormous.

“I’m so proud to represent the Argetsinger family, to be here to present this award to a man who so richly deserves it. Tonight, I can’t think of anyone else better in this country than Bobby Rahal [to receive] this award. He’s been a great help to the IMRRC as well as young drivers around the world.”

Throughout the evening salutes were given in person and by video. Among them were previous Argetsinger Award recipients Penske, in the audience, as well as Ganassi, Petty and Andretti via video, and Jim France via statement. The videos made by racers from all corners of motorsports included Don “the Snake” Prudhomme, JR Hildebrand, Scott Dixon, Zak Brown, Takuma Sato, Danica Patrick, John Force, Lisa Boggs of Firestone, David Hobbs and competitors from a number of different series.

Speaker after speaker told stories of the intense commitment and passion that Rahal has shown throughout his career as a driver and team owner.

NHRA Drag Racing champion Force, whose daughter Courtney is married to Rahal’s son Graham, said, “It’s all about your family, those children, and those grandchildren, those boys and girls, men and women that you have raised. Let me just tell you, you know that’s better than all the trophies put together, because whether you like it or not, we’re family.”

Said Penske, the 2016 recipient of the award, “Bobby, you’re a great driver, a champion. I think the commitment by all of us here tonight is to be able to give back. And, I think that’s probably the most important thing I’ve heard tonight is what you give back to other people, and I think that’s so important in the world we live in today and what’s taking place. We need to be leaders. Bobby Rahal is a leader. He’s a friend and I want to congratulate you tonight for the award you well deserve.”

Added Jay Frye, president of INDYCAR, “One of the highlights of my job is being around people like Bobby every day.” 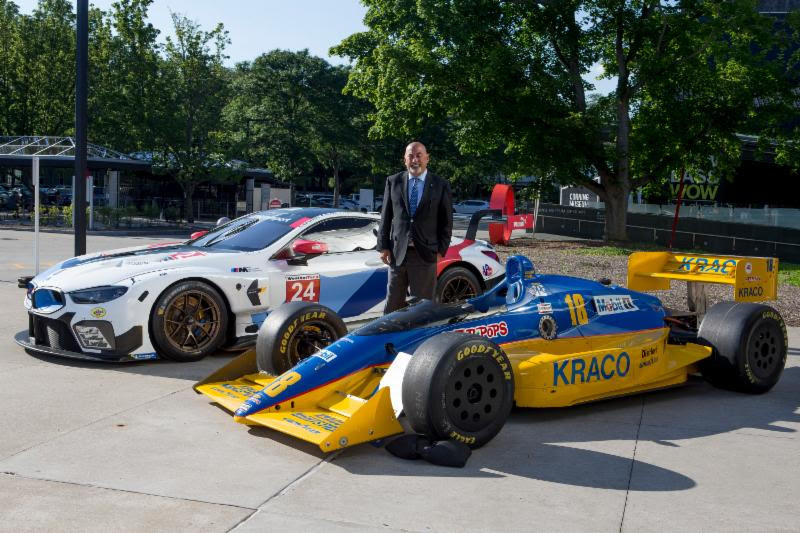 “I can’t thank enough the Argetsinger family for this award,” said Rahal. “I’ve had the privilege to work with J.C. and [son] Duke, the whole family, their mother over the years here. I really thank my old friends on the board of the IMRRC. I think the Center is fortunate to have the caliber of board members that it has.

“And, I want to thank all of you for coming and the nice things you said about me tonight. It’s a family honor and [the IMRRC] is also a very good cause.”

The evening concluded with the live auction of an original, commissioned painting by motorsports artist Randy Owens depicting Rahal’s 1986 Indy 500 victory. A silent auction offered a variety of items from corporate leaders in the motorsports industry and the Finger Lakes Region of New York, and members of the IMRRC’s Governing Council.

Racer Media & Marketing, Inc, North America’s largest, independent general-interest motorsports publisher, has acquired Vintage Motorsport, the leading publication covering the historic (vintage) motor racing scene. The acquisition includes the print magazine title, known as “The Journal of Motor Racing History,” along with the digital and online assets including vintagemotorsport.com. D. Randy Riggs will remain on board as the magazine’s editor-in-chief.

Vintage Motorsport now joins RACER magazine, RACER.com and SportsCar, the official magazine of the Sports Car Club of America as titles published by Racer Media & Marketing, Inc (RM&M). In all, RM&M (across various business iterations) has been publishing motorsports content since 1979. 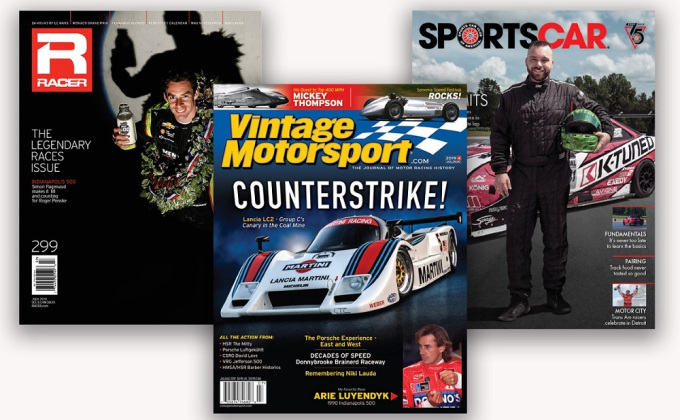 “We are very excited to bring Vintage Motorsport under the RM&M banner,” said Paul Pfanner, co-founder, President and CEO. “It is the most respected title covering historic motor racing – and racing history more broadly – in North America. As the new stewards of the brand, we will proudly carry the standard into the future while using the cross-platform promotional power of the RACER brand to expand the base of Vintage Motorsport’s audience.”

It’s not RM&M’s first relationship with Vintage Motorsport, having provided publishing services in 2001-02.

“I’ve been a reader of Vintage Motorsport since 1986, and would personally like to congratulate outgoing publisher Michael Silverman and editor-in-chief D. Randy Riggs on their success in making the magazine the respected leader in coverage of historic motor racing,” added Pfanner.

Beyond its coverage of historic motor racing, Vintage Motorsport also broadly covers classic car auctions, concours, automobilia and other cultural happenings as they relate to historic race cars and personalities. In fact, in a reader survey, 75% say they refer to Vintage Motorsport before making an automotive hobby-related purchase.

“Vintage Motorsport has come a long way from when it began as a simple newsletter in 1982. We’ve seen firsthand how this segment of the market has grown every year since,” said Riggs. “The time is now to take the next step in our evolution. As part of the RACER portfolio, we will have access to a new audience and a richer social media presence that will take Vintage Motorsport to new heights.”

Outgoing Vintage Motorsport Publisher/CEO Michael Silverman noted, “This is the closest thing to a perfect fit you’ll find in publishing, as Vintage Motorsport will expand the footprint of RM&M to include its authoritative and award-winning content, and RACER’s expertise, resources and proficiency in both print and digital content delivery will ensure Vintage Motorsport’s continued success and expansion. Most notably, D. Randy Riggs will continue at the editorial helm of Vintage Motorsport, and as he has proven for more than two decades, he is decidedly up to the task.” 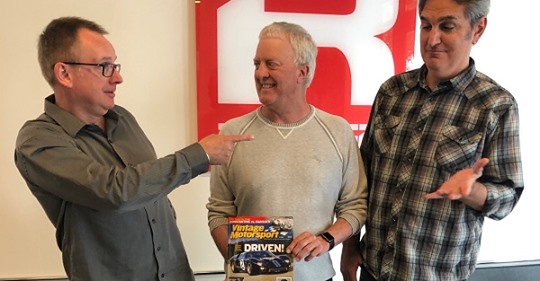 Both RACER magazine and RACER.com have registered impressive growth since 2012 when the original founding group retook control of the brand. Audited magazine circulation has grown 165%, and RACER.com is now averaging over 420,000 unique visitors per month according to Google Analytics. Total digital audience for May of 2019 topped 1 million users when combining the web presence with RACER social media platforms.

“RACER has always been about the people and the power of motorsport. We go beyond the results to get to the real stories that shape motorsport across a number of levels and genres,” said Laurence Foster, RACER’s editor-in-chief. “With Vintage Motorsport, kindred spirits have been united, and while RACER has some historical features, with Vintage Motorsport, we have the chance to shine a brighter light on the cars of the past that are still competing today.”

RM&M will begin publishing Vintage Motorsport with the September/October 2019 issue on sale August 15, and assume control of the online and digital assets with immediate effect.  To subscribe to Vintage Motorsport visit https://racer.com/vmsubs.