PENSKE TO ACQUIRE ALL THINGS INDY (WITH UPDATES); TEAM USA SCHOLARSHIP’S HUFFAKER ON PODIUM AT SILVERSTONE

The official announcement on Nov. 4 read as follows: “The Board of Directors of Hulman & Company announced today that it has entered into an agreement to be acquired by Penske Corporation, a global transportation, automotive and motorsports leader. Penske Entertainment Corp., a subsidiary of Penske Corporation, will acquire all Hulman & Company principal operating assets, including the Indianapolis Motor Speedway, the NTT IndyCar Series and IMS Productions. The transaction will close following receipt of applicable government approvals and other standard conditions.”

RRDone deal: Roger Penske (left) and Tony George. [IMS image]The blockbuster transaction has been in the works for several months according to Tony George, Hulman & Company chairman, who said his company had made the initial approach. Details will be released as they are finalized. Check RACER.com for updates: Penske aiming to elevate IMS; George had reached limits; Penske on conflict of interest. Plus Robin Miller interviews RP.

The seven weeks that changed racing – an insightful editorial by RRDC member and RACER founder Paul Pfanner – sums up the impact of recent events.

A thrilling weekend of action at the Walter Hayes Trophy at Silverstone ended with Team USA Scholarship driver Scott Huffaker finishing a fighting third in the Grand Final from an original entry of over 100 Formula Ford cars. 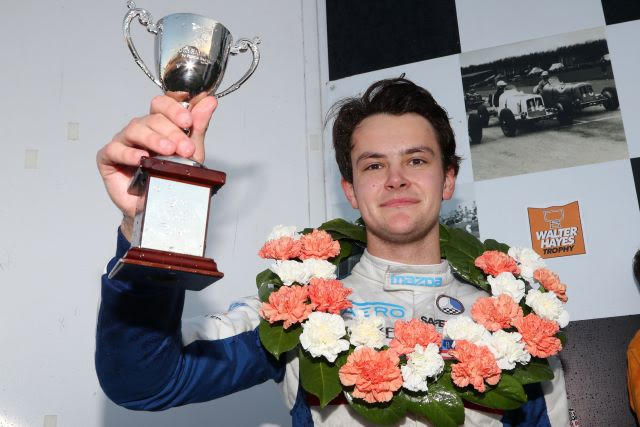 Huffaker, 19, from Menlo Park, Calif., also backed up his Heat race win from yesterday with another victory in this morning’s Semi-Final round. Teammate Josh Green, 16, from Mount Kisco, N.Y., wasn’t quite so fortunate. After posting the fastest lap time of all in qualifying on Saturday, Green worked his way from seventh on the grid to third in the same Semi-Final before tangling with veteran Oliver White (Medina JL17) at Copse Corner with five laps remaining.

A late change of regulations meant that today began with both Team USA Scholarship drivers drawn together in the first of two 12-lap Semi Final races, with Huffaker lining up second and Green on the inside of row four.

Oliver White (Medina), who started on pole position by virtue of posting the fastest lap during yesterday’s four Heat races, maintained his lead at the start, albeit with a huge pack of snarling Formula Ford cars in his wake. A bold overtaking maneuver at Brooklands on the opening lap saw Huffaker slip through into the lead, which he narrowly maintained throughout.

Green (above) moved up two positions on the opening lap, then found a way past Ivor McCullough (Van Diemen) for fourth on lap four, at which point seven cars had formed a small breakaway group. Unfortunately, a coming-together with White at Copse Corner while disputing third place on lap eight forced Green to the sidelines.

Huffaker, meanwhile, kept his cool at the front. He briefly lost the lead to Matt Cowley (Van Diemen) on the run to Copse on the final lap but regained the advantage at Becketts and then held off a a brave around-the-outside move by Luke Cooper (Swift) at Luffield to take the checkered flag just 0.164-second ahead of the Englishman.

“On the first lap, I was right on Ollie and he went to the outside,” related Huffaker. “I initially wasn’t going to go to the inside but he broke really early and I thought, well if you are going to give me it, I just kind of forced him out wide and then I controlled the pace. I saw that Matt was really quick and he was putting a lot of pressure on me. On the last lap, he got ahead of me going into Turn One (Copse) and we were side by side. I got a little bit loose on the inside (at Becketts) and we had some contact. Unfortunately, he got the worse end of the stick but that’s just how it went. I just defended on the last lap and was able to bring home the win. It was good.”

The second Semi Final was interrupted by a pair of Safety Car periods before Irishman Jordan Dempsey (Spectrum) drove past Englishman Rory Smith (Van Diemen) at the final corner, Woodcote, to snatch the victory by just 0.014-second over Cooper.

The morning gloom and cold had been replaced by bright sunshine prior to the start of the Grand Final, with Huffaker once again lining up on the outside of the front row. He immediately slotted into second behind Dempsey, and was chased by Smith and Cooper before the red flags flew after four laps following a couple of separate on-track incidents.

The race was restarted for a 10-lap duration. Dempsey once again took off into the lead and was never seriously threatened en route to a dominant victory for Kevin Mills Racing. 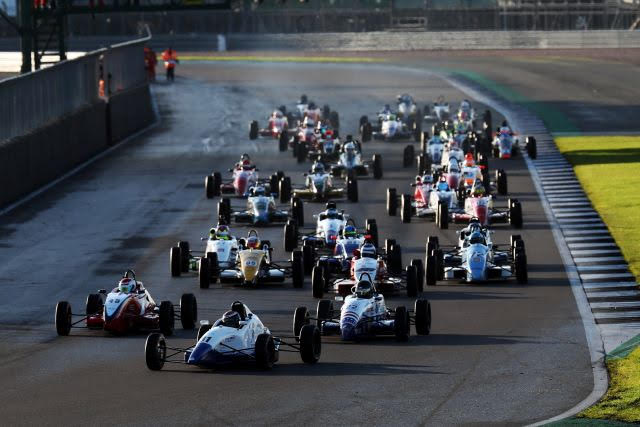 Huffaker steadfastly clung onto second place, under intense pressure from Smith, who eventually faded back to 10th, Cooper, who slipped to ninth by the finish, Jack Wolfenden, who showed impressive pace in his Firman, and the Spectrum of two-time and defending champion Michael Moyers, who had gradually worked his way back into contention following an incident in his Heat race on Saturday.

Moyers slipped ahead of Huffaker on lap six, only for the American to repay the favor with a breathtaking pass under braking for Brooklands next time around. Huffaker’s Cliff Dempsey Racing teammate, Ireland’s Jonathan Browne (Ray GR18), also moved into a challenging position despite starting the Final from 11th.

A thrilling battle for second saw Huffaker briefly fall to fourth with a couple of laps remaining, but he repassed Browne on the final lap at Becketts to finish with a well-deserved podium result, less than 0.2-second behind Moyers.

“The race was good and the experience has just been amazing,” said Huffaker. “To come here and get the podium is huge for me. I wanted the win but we won the Heat and the Semi. I had to start on the bad side (of the grid) where it was damp. Luckily, I ended up holding my position but it took me a while to get into my rhythm and the race was so short with the red flag and everything. I think that is where I kind of lost out today. We had the pace and I really wanted the win but I got to battle with Moyers and Jonathan which was a great battle. I made a good pass on Moyers and then Jonathan there at the end. We snagged a podium so that’s great. I need to say a big thank-you to my mechanic Matt (McComish), the entire Cliff Dempsey Racing team and everyone who makes the Team USA Scholarship possible.”

Green was disappointed not to make the Final but will still travel home to the United States with memories to last a lifetime.

“It was a really good weekend and we had tons of pace,” said Green. “I qualified on the overall pole of the 105 cars that were here, which was awesome. The Heat race was really good racing. The Semi was going well. I started eighth and was passing for third and just ended up having contact with another driver and I won’t blame anyone. The Final was great to watch. Scott and Jonathan [Browne] both did amazing jobs in the Final. It was really, really impressive. I can’t thank enough the Team USA Scholarship, Jeremy Shaw and Cliff Dempsey Racing as well. It has been a truly amazing experience and it wouldn’t have been possible without all of them.”