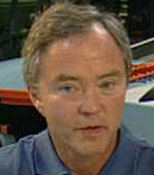 Cluxton raced for the Ferrari factory team and NART (North American Racing Team) in the 1970s. At age 26 he became the youngest exclusive Authorized Ferrari Dealer in the U.S. With help from multiple Le Mans-winning team manager John Wyer, Cluxton purchased the assets of the Gulf Research Racing Company in 1975. The acquisition included the Mirage team and all associated manufacturing rights to the Mirage marque. After hiring John Horsman as the team’s Director of Racing, Cluxton moved the operation to Arizona in 1976. As a Group 6 Prototype entrant, and later a Group C Prototype entrant, Cluxton continued successfully contesting the Mirages at Le Mans as a two-car team. With Wyer’s counsel and Horsman’s direction, the Mirages won in 1975 and finished 2nd overall in 1976 and 1977. From 1974 to 1978, the Mirages never finished outside of the top-10, posting a 1st, two 2nds, a third, a fourth, a fifth and a 10th. Among the drivers who raced for Cluxton’s Mirage team were RRDC members Mario Andretti, Michael Andretti, Derek Bell, David Hobbs, Jacky Ickx, John Morton, Sam Posey and Vern Schuppan, as well as Jean-Pierre Jaussaud and Jacques Laffite. In 2012, Cluxton was named Honour Member No. 1 of the prestigious International Club des Pilotes des 24 Heures du Mans by the the Board of Directors of the Automobile Club de l’Ouest (ACO), the organizers of the round-the-clock classic since its inception in 1923. As its first Honour Member, Cluxton’s recognition represents a renewed effort by the ACO to reestablish the elite Club des Pilotes that was founded in 1953, honoring those teams and team leaders whose achievements and successes have contributed to the spirit, the legend and the living tradition of the race.