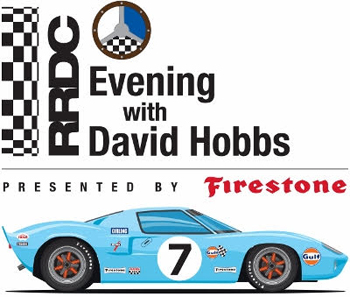 If you were to choose one racing driver to spend a truly enjoyable dinner with, who’d be better than David Hobbs?

While he might not pick up the tab, he’s guaranteed to pay you back with some of the all-time greatest, unfiltered racing tales you’ll ever hear.

On April 11, before the Acura Grand Prix of Long Beach, you’ll have the opportunity to enjoy that very special dinner with David, when the Road Racing Drivers Club honors Mr. Hobbs at its 11th annual Legends Banquet.

And it’s a well-deserved honor, for David has truly excelled at two careers in motorsport.

As a driver, he raced virtually everything – and everywhere. He drove 20 times at Le Mans alone, made six starts in F1 and four at Indy. He won the F5000 and Trans-Am Championships and raced with distinction in the Can-Am as well as IMSA. He was always fast, rarely made mistakes and was inducted into the Motorsports Hall of Fame of America in 2009.

As a television commentator, David brought his unique sense of humor to the broadcasts – along with his insights as a driver. He could make even the most boring F1 race fun to watch. And, as an after-dinner speaker, he has left many an audience in stitches with his racy recounts of what really goes on behind the scenes in racing.

He was a fixture on F1 broadcasts for years, announced the first network telecast of the Daytona 500 and appeared in the movie “Stroker Ace.” He also appeared in the “Cars 2″ movie as announcer “David Hobbscap,” a 1963 Jaguar Lightweight E-Type from Hobbs’ hometown of Upper “Bonnington,” England.

We hope you will join us for another great evening of racing camaraderie and tall tales.

Outdoor cocktails, with some of David’s most famous race cars on display, will commence at 6:00 p.m.

Get your tickets early; you don’t want to miss this one.

All proceeds go toward the RRDC’s young driver initiatives:

Our thanks to Jutta Fausel-Ward, Dave Friedman, Tom Davey and Paul Laguette.