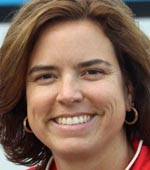 The 2015 and ’16 Trans-Am champion, the first female to win a title in the 49-year history of the series. Has worked her way up to the championship with her family-centered team. Was a podium finisher at the 2010 SCCA Runoffs in GT1, and then turned to Trans-Am. Has competed in all Trans-Am races for the past seven years. Finished second in the championship in 2012, fourth in ‘13, and third in ’14 and ‘17. Won her first Trans-Am race in 2011 and had her first pole in ‘14. Won the last three races of 2015 to clinch the title.

Amy Ruman and her racing team.