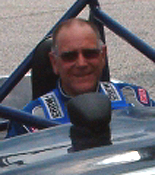 In the late 1960’s, Jerry was one of the best SCCA G-Production Spitfire drivers in the country, finishing second at the National Championship Runoffs in 1970. Barker then stepped back to run Formula Vee in regional racing. In 1975 he returned to the Spitfire and won the G-Prod National title. In 1980 he was awarded the SCCA Kimberly Cup after winning his second national title in the Spitfire, this time in F-Prod. He and his dad prepared his cars.