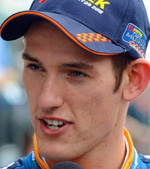 Began karting career in Australia in 2004, winning numerous kart and Formula Ford races. In 2014 became the first driver to advance in successive years from USF2000 to Pro Mazda to Indy Lights. Moved to the U.S. in 2012, winning the USF2000 Championship. Won a Team USA Scholarship and contested the Formula Renault Winter Series in the UK, finishing a close second in the final race while setting fastest race lap. Moving up to Pro Mazda in 2013, earned his second Mazda scholarship by winning the title in a record-shattering season that included new series milestones for most wins (13), most consecutive wins (7), most podiums (15) and most fastest race laps (13). Moving up the final step in the ladder in 2014, earned four podium finishes in two years of Indy Lights, including a victory in the GP of Indy. Is the youngest driver (20) to compete in Formula E when he drove for Andretti Autosport in Malaysia in 2014. Returned to Australia in 2015. In three years has scored eight victories and 31 podiums in the Speed Energy Formula Off-Road series. Won class at the 12-Hour at Bathurst in 2018 in a BMW M4. Currently driving V8 Supercars. Matthew is the son of Geoff Brabham.