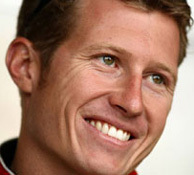 Currently racing in the Indy Racing League, driving for Team Penske. Ryan began racing karts in 1993 at the age of 11, and placed second in the Junior Yamaha Australian Championship…captured C.A.M.S. Junior Karter of the Year honors in 1994 and 1995. He was a factory CRG Team Driver 1996 through 1999. Signed to the Toyota Drivers Academy program in 2001 and drove as an official TDA driver through 2003 – logging nine wins. He was the 2007 ALMS Rookie of the Year, has placed fifth and tenth in the Indianapolis 500, third and seventh in the Daytona Rolex 24 Hr. Finished third in the IRL 2009 season championship