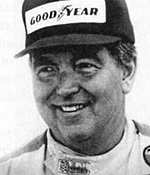 Porterfield, a 32-year member of the RRDC and a 55-year member of the SCCA passed away in April 2012 at the age of 80. He was inducted into the RRDC in 1980 on the heels of his second consecutive SCCA B-Production national championship in a Corvette at Road Atlanta. Porterfield began his racing career in 1960, driving open-wheel cars and later Corvettes in Southern California. He was a regular on the Can-Am circuit in the mid- to late ’60s scoring four podium finishes and finishing fifth in points in ’68. He moved to Trans-Am in ’69, competing in 41 races before retiring in ’92. He formed Porterfield Enterprises in 1986 specializing in the manufacture and sale of brake pads and brake system components to the performance racing industry. Porterfield was a mainstay in the SCCA, serving on the board of directors for both SCCA, Inc. and SCCA Enterterprises of which he was still chairman at the time of his passing. One of his favorite “jobs” was organizing the workers for the annual Long Beach Grand Prix. Porterfield was the 2009 recipient of the Woolf Barnato Trophy, the SCCA’s highest honor and was posthumostly inducted into the SCCA Hall of Fame in 2013.