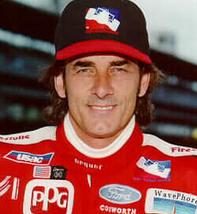 Arie is best known for his 1990 and 1997 Indianapolis 500 victories; but throughout his distinguished career he has experienced success in many different forms of racing with victories in the 1989 12 Hours of Sebring and the 1998 24 Hours of Daytona. Arie represented IndyCar racing in the International Race of Champions (IROC) series on several occasions. His storied career lies now in the record books, and he has shifted his focus to managing Arie Luyendyk, Jr. in his IndyCar efforts.