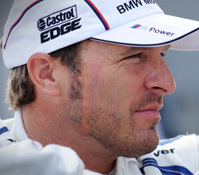 Bill has been one the most successful sports car drivers in recent years. He joined with BMW Team PTG in 1996 after a very successful privateer effort. In 1997… won the IMSA GT3 championship, driving a BMW M3. He was the Grand-Am GT Series champion in 2002 and 2004. Scored back-to-back Driver’s Championships in 2003 and 2004 in the SPEED World Challenge Touring Car series. Currently drives a BMW M3 in the American Le Mans Series GT2 class for Rahal Letterman Racing. His career started in the 1970s in motocross, moved to IMSA GTU in 1987. – stayed there until 1997, his last year resulting in him winning the championship. During his time in the IMSA Series he had also become the 1996 Peruvian Formula Three champion. Won the 1999 World Sportscar Championship and the American Le Mans Series (1999-2003), driving a BMW V12 LMR in 1999 and 2000. During the Petit Le Mans at Road Atlanta in 2000, his BMW did a spectacular back flip! Auberlen won both the 2003 and 2004 Speed World Challenge Touring Car Championship.