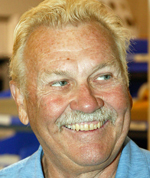 Bill Simpson was a pioneer in motorsports personal safety equipment with flame retardant uniforms, driver restraint systems, shoes, gloves and helmets, steadfastly advancing the technology over the years. Starting in drag racing as a driver before moving into SCCA and then USAC machinery, Simpson had 52 starts in Champ cars with 11 top-10 finishes. Recalling a drag racing accident he had at 18 that broke both his arms, Simpson conceived and developed the parachute for slowing drag cars. It became his first commercial safety product. In 1967, while developing the umbilical cord for NASA, Simpson met astronaut Pete Conrad who told him about DuPont’s Nomex from which Simpson developed racing’s first fire suit which he delighted in demonstrating by setting himself on fire. He is a member of the Motorsports Hall of Fame of America and wrote an autobiography, Racing Safely, Living Dangerously and its sequel Through the Fire. 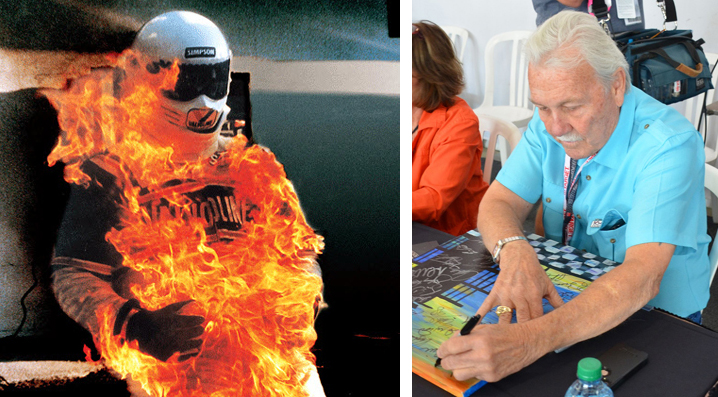 The fiery Bill Simpson (left) and a quieter version (right) signing his book.