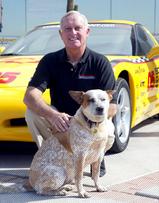 Began racing on an Indian motorcycle. Moved up to a Morgan Plus 4 and then a Corvette. Got his big break when Carroll Shelby asked him to drive one of his Cobras…Bob responded with a class win in his first race. Won the 1964 LeMans GT class co-driving with Dan Gurney. In 1965 he co-drove a Daytona Coupe to victories at Sebring, Monza, the Nurburgring, and Rheims. Also raced F3 and F2 along with USRRC sports cars. Founder of the Bob Bondurant School of High Performance Driving. Technical advisor to the movie “Grand Prix”. Bondurant was a 2003 inductee into the Motorsports Hall of Fame of America. Bob passed away in November 2021 at age 88.