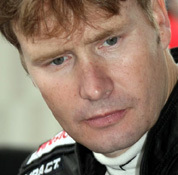 Raced in CART for seven years with three top-10 finishes. Then, in ’96, won his first Champ Car race…the Indianapolis 500…beginning a nine-year association with Hemelgarn Racing. After winning Indy, scored seven more victories, plus an additional eight podium finishes. Was IndyCar champion in ’00 and runner-up for the title the following year. Has scored five top-10 finishes at Indy and returned this May for the first time since ’09 in a car owned by his father, RRDC member Bob Lazier as is his brother Jaques, the Mark Donohue Award recipient in ’96.