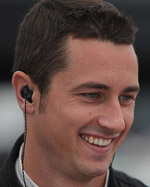 Began career in karting before graduating from the Jim Russell Racing School and winning the Formula Russell Championship in 2005; moved on to the USF2000 Championship in 2006, finishing second to J.R. Hildebrand; also won a TeamUSA Scholarship prize, entering him in the Formula Palmer Audi Autumn Trophy in England, which he won; won the 2007 Star Mazda Championship, then moved on to Toyota Atlantic and thence into sports car racing; won the 2014 TUDOR United SportsCar Championship GTD class for BMW and Turner Motorsports. Moving to Action Express in 2015, Cameron finished third in the Prototype Championship with two wins, four podium results and top-five finishes in every race. He won the WeatherTech SportsCar Championship title in 2016 with two wins and five podiums. In 2017, Cameron was championship runner-up with a victory and five podiums. For 2018, he is driving an Acura Team Peske ARX-05 DPi with Juan Pablo Montoya.