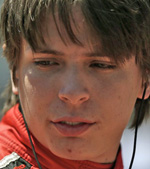 After winning numerous karting titles, the Columbia native began racing cars in 2007 in various Skip Barber series in the U.S. In 2008 made his pro debut in Formula BMW Americas, finishing fourth in Formula BMW Pacific and 14th in the Formula BMW World Finals. In 2009 won the Formula BMW Americas title, capturing five wins and three poles and finishing on the podium in each of the 14 races. Has also raced successfully in Italian Formula 3 and the GP3 Series. Second in 2012 Pro Mazda Series, moving to Indy Lights in 2013, winning the championship and the Mazda Scholarship in 2014. Signed with Bryan Herta Autosport to race full time in IndyCar in 2015, earning Rookie of the Year title. Has since driven for Dale Coyne and Harding Racing, finishing ninth for Harding in the 2017 Indy 500. Also raced in TUDOR United SportsCar championship endurance races for Harding.