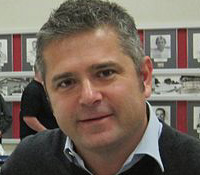 Gil was the 2000 and 2001 CART Champ Car Champion and the winner of the 2003 Indianapolis 500. He finished the 1991 British F3 Championship season in third, behind Rubens Barrichello and David Coulthard, then won the 1992 British F3 Championship -scoring seven wins. He tested for the Footwork Arrows F1. In the U.S., he was awarded the Champ Car Rookie of the Year in 1995. On October 28, 2000, during CART qualifying for the Marlboro 500 at California Speedway, de Ferran set a world speed record for the fastest lap of a closed course, with a lap at 241.426 mph. In 2005 he moved to the BAR-Honda Formula One team as their sporting director, resigning in 2007. Drove again starting in 2008 in ALMS, making ten starts in the No. 66 Acura ARX-02a for de Ferran Motorsports in LMP1 with eight podium finishes. In 2009 at ALMS finale Laguna Seca, he ended his legendary career with