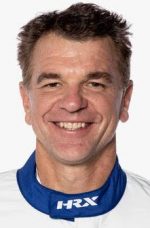 Hugh currently races for Team TGM in both the IMSA Michelin Pilot Challenge, where he co-drives with his brother Matt, also a member of the RRDC.