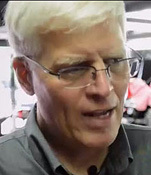 As race engineer and technical director, Jeff is the co-author of Inside Race Technology with Paul Haney, and a respected race engineer with a long list of victories. He has led the engineering and technical efforts with both IMSA (Fermin Velez) and Grand Am (Krohn Racing) teams, including a recent one-two finish for Level 5 Motorsports in the Sebring 12-Hour. Braun saw his first car race at age three and by age seven was racing karts. He earned a B.S. in Mechanical Engineering in 1981 from the Milwaukee School of Engineering and immediately joined Transact as team manager fielding cars for Alan Kulwicki in ASA competition. Two years later, Braun bought out the owners and in 1990 turned Transact into a pure race engineering consultancy. The company has engineered almost every type of racecar run in the world, winning six sports car championships…both Grand Am and ALMS…including five victories in the Sebring 12 Hour. Despite all the success as an engineer in major race series, Jeff says racing with his son Colin and family are the most special. The family including son Travis and wife Diane raced karts all over the world winning many races and 5 US National championships with Colin driving. Following that the family team won 2 National formula car championships with Colin before he turned 16. Jeff and Colin continue to work together on the business aspects of racing now that Colin is a professional driver. Travis is a TV writer in Hollywood. Jeff is currently engineering LMP2 cars in the ALMS series and Le Mans for Level 5 Motorsports.He lives on a small West Texas ranch with Diane, his wife of 32 years.