Only RRDC member who successfully made the leap from a solid road racing background to win on NASCAR ovals, stopping along the way to excel in both CART and NHRA drag racing. Picked up his first NASCAR Cup victory at Daytona’s Pepsi 400 in 1997, then added a 1999 Martinsville win. Began racing go karts at age 11 . USAC Midget Rookie of the Year in 1983. Tuned his abilities in IMSA road racing with BMW in 1986. Won 3 Firestone Firehawk Endurance Championship races at Watkins Glen, Road America and Riverside, and a Camel GTP race at The Glen . Raced in the 24 Hours of Le Mans in 1988 with Mario and cousin Michael. Made CART debut in 1987, and Indy 500 debut in 1988 . First CART win came in 1991 in Australia , fifth in 1991 Indy 500 . Turned to 300mph Top Fuel drag racing in 1993 and reached semifinals in his first try. Joined NASCAR in 1993 with Billy Hagan, then to Michael Kranefuss and Cale Yarborough-owned teams for 1995-97, winning the July race at Daytona in ’97. Hired by Petty Enterprises in 1998. Diagnosed with stage 4 colon cancer in 2017, Andretti battled the cancer into remission twice before succumbing to the disease in January 2020. He spent the last three years of his life advocating for early detection and prevention. 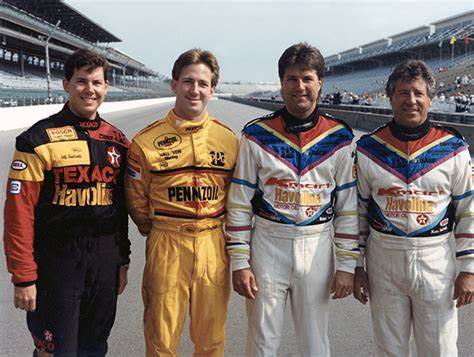