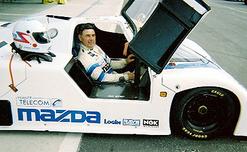 John has raced successfully in numerous categories since 1970 when he won the Brundage Trophy at Daytona driving a FVee for Ed Zink. He ran near the front in the Gold Cup Super Vee Series before turning his efforts to hill climbing. Stuffing rotary Mazda powerplants into a variety of open wheel cars, Finger was king of the hill at Chimney Rock a dozen times through 1984. All this time, he was competing successfully in SCCA CProd, GT2 and GT1, ARCA and IMSA GTU where he scored victories at Miami (twice), Long Beach and Watkins Glen. In the 2000 Daytona 24, Finger won the American GT class. He won the ARCA race at the Glen in 2001. He currently runs a variety of historic cars in HSR and is once again winning hill climbs.