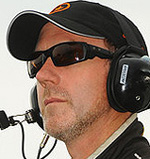 Karl Thomson is a successful racer and describes himself as a “a serial entrepreneur” who has built businesses in a variety of sectors over the past 25 years. He founded Compass 360 Brand Architects in 1994, building it into one of Canada’s most respected boutique branding firms, and in 2003 launched C360R (originally known as Compass 360 Racing), which has won more than 50 professional sports car races and five championships. Thomson himself was the 2003 CASC (Canadian Automobile Sports Club) GT Sprints champion and Canadian Touring Car Rookie of the Year. He finished second in the 2007 KONI Challenge ST class, with a series-leading four wins, and finished second in the Pirelli World Challenge Touring Car class in 2014. He took second in the GX class of the Rolex 24 At Daytona in 2013. C360R currently fields a pair of McLaren 570S cars and an Audi S3 in the IMSA Continental Tire SportsCar Challenge, plus an Audi RS3 LMS in the Pirelli World Challenge TC category. Thomson also is a long-time supporter of charitable endeavors in the racing paddock. He and his team were honored as recipients of the Children’s Tumor Foundation’s Humanitarian Award in 2014, evolving to now support the broader community of children’s charities through the far-reaching efforts of The Race Day Foundation where he is a member of the Board of Directors, alongside RRDC members Brian Till, Justin Bell, Leigh Diffey and Patrick Long.