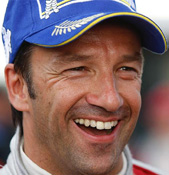 Another of the great Audi prototype champions, Werner was in his mid-20s when he first came to notice with a second place in the ’90 Formula Opel championship in Germany behind Mika Hakkinen. The following year, he was runner-up in the German Formula 3 championship to Pedro Lamy. He then moved to sports cars and touring cars in, first in Porsche Cup where he won the ’95 Daytona 24 in a Kremer-Porsche. He became an Audi team driver in 01 with Audi Sport, Joest, Goh and ADT Champion, competing in every LeMans 24-Hour from ’02 through ’10. He was in the LeMans winner in ’05, ’06 and ’07 teamed with Biela, Kristensen, Pirro and JJ Lehto. He was the ’04 ALMS co-champion with Lehto and ’08 co-titlest with Lucas Luhr. Won Petite LeMans overall in ’04 with Lehto and took the LMPC class win in ’10 in an Oreca Chevrolet.