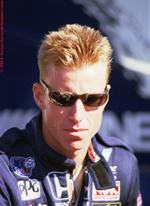 Memo began his career racing Karts. In his early years, he sold his apartment to fund his career and spent 4 months living in his car. He worked at the Jim Russell racing school as a mechanic to fund his career…eventually getting a chance in Champ Car with Derrick Walker in 1999, although this was as a short-term replacement. He did the same task for Gerry Forsythe a year later, and Chip Ganassi in 2001 – twice coming close to race victories. Since 2005 he has competed full time in the Grand-Am Rolex Sports Car Series, co-driving with Michael McDowell to a victory in the Mexico City season finale