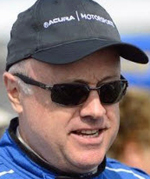 It is almost a flip of the coin to decide whether Peter Cunningham should be more respected for his personal ability as a championship driver or for RealTime Racing, the legacy team he created 32 years ago as the factory Honda and Acura team in the Pirelli World Challenge… As a driver, Peter has won 91 sports car races in 10 professional series, a record unmatched by anyone in North American sports car racing history, not to mention his 10 Drivers’ Championships in SCCA Pro Racing series. He also owns seven more titles in such disciplines as IIRA Ice Racing, SCCA Pro Rally and more recently, the Pikes Peak International Hill Climb. In 2018 Peter became the youngest inductee into the SCCA Hall of Fame… As a team owner, Peter heads an effort which has won 92 individual events – 14 by his drivers – in 26 years of World Challenge racing, 25 driver’s championships and, most importantly, 14 manufacturer’s championships for the Honda and Acura brands which may explain the length of their relationship.