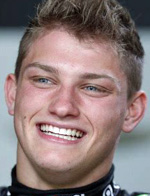 Karam is a two-time Mazda Road to Indy scholarship recipient. Dominated the 2010 USF2000 National Championship, earning title by winning nine of 12 races while taking the pole in all but one event. Then moved up to Pro Mazda, earning back-to-back oval victories on his way to fifth place in the 2011 championship. Third in points with three wins in 2012. Climbed the final rung in 2013 and won the Indy Lights title with three victories and nine total podium finishes. Drove first two sports car endurance races of the 2014 TUDOR United SportsCar Championship for Chip Ganassi Racing. Ganassi then helped him secure a ride in the Indy 500, where he qualified 31st and finished ninth. Drove for Ganassi in 2015, earning a third place finish at Iowa and fifth place at the 500-mile race in Fontana. Previously competed in various karting series, becoming a 35-time World Karting Association and IRL Stars of Karting National champion. At 13, was the youngest driver to win the annual Skip Barber Karting Scholarship Shoot-Out. Was the only American driver to compete in both a national karting championship and an open-wheel professional series full time in 2009.