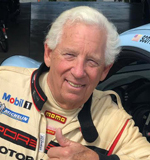 I became an avid race fan at age 12 growing up near Watkins Glen where I attended many races. In 1987 I partnered with a few local businessmen and raced in selected Winston Cup races as a car owner. We qualified and raced but were never very successful.

While looking for another avenue to become more competitive I was introduced to Frank Cicci, and we formed Cicci Welliver Racing in 1989 and later called it Team 34. We had many successful years with three Busch Series Teams where we raced over 700 races. One of the greatest memories was finishing first and second at home in Watkins Glen and sitting on the pole for The Winston Cup Race there. In 2003 I sold my teams and wanted to spend more weekends with my wife, children and grandchildren.

Racing has a way of never letting you go, and I had to be involved in some way. In 2004 I attended several Skip Barber Schools at Mazda, Road America and The Glen. The following year, I had a Spec Racer Ford built and raced with SCCA for a few years. In 2006 I purchased a 964 European Super Cup which I raced in SCCA, HSR and PCA events.

A good friend and mentor thought it a good idea that we purchase the first two Cayman Interseries Cars from Napleton Porsche in Chicago in 2009. We both raced in that series for several years. After The Interseries faded I raced with SVRA, HSR, IGT and PCA at several venues. I also attend many track day events at The Glen and many other tracks.

My Company sponsored The SVRA Vintage Weekend at The Glen for many years. Four years ago I was inducted into The Drivers Walk of Fame in Watkins Glen.

I am proud to have served on The Board of The IMRRC where I am currently it’s Treasurer. Many of the archives of The Center are housed at my warehouse in Montour Falls near Watkins Glen. I recently purchased a GT3 Cup and look forward to the next chapter.