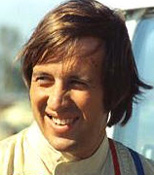 Tony A-to-Z has to lead off our RRDC biographies….he began his racing career as a winner in a Volvo 544 at Marlboro, Md. … Before he retired from professional racing, he had notched two class wins in the Rolex 24 At Daytona (1969, ’79); a class win in the 24 Hours of Le Mans in 1972; a historic class win in the first-ever SCCA Trans-Am Championship series at Sebring in 1966; and the 1969 SCCA F/5000 series championship. His list of career race wins includes the 1966 Marlboro 12-hour Trans-Am, 68-69 season Trans-Am wins at Lime Rock (2), Meadowdale, Bridgehampton, St. Jovite, Watkins Glen and Bryar; F/5000 at Kent and Road America in 1969; and IMSA GTO/GTU class wins at Daytona, Riverside, Road America (2), Mid-Ohio, Brainerd, Sears Point, and Portland … He also won a non-championship 12-hour race in Quito, Ecuador in 1971 in a Ferrari 512 … Tony’s unique personality was enhanced in 1971 when he, Oscar Koveleski and Brad Nemecek formed the Polish Racing Drivers of America and drove a Chevy motor home to a second place overall in the Cannonball Baker Sea-to-Shining Sea Memorial Trophy Dash, finishing only 20 minutes behind winners Dan Gurney and Brock Yates in a Ferrari Daytona.