Trump awarded the medal to Penske, Team Penske owner and CEO of Penske Automotive Group, the nation’s second-largest auto retailer, during a ceremony Thursday in the Oval Office at the White House. Penske was joined by many in his family, including his wife, Kathy and children. 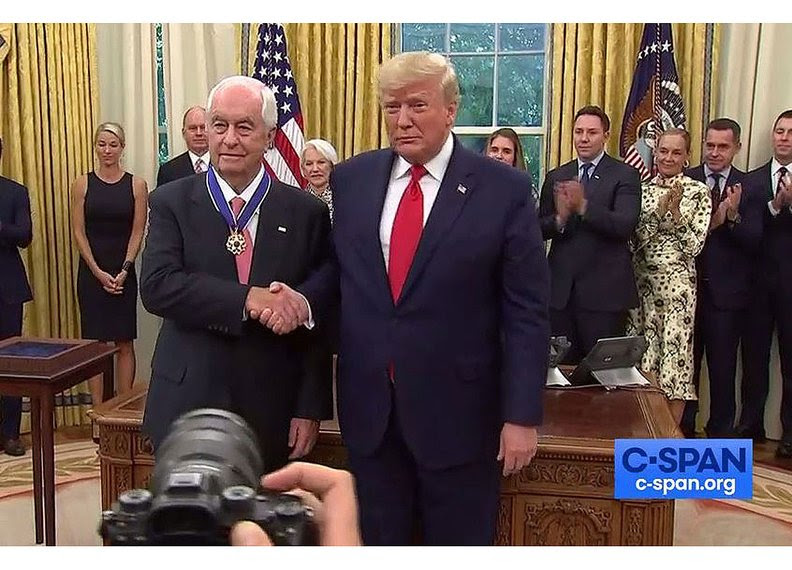 Penske received the medal at 5:05 p.m. EDT on Thursday after brief remarks by Trump, who lauded Penske for his unprecedented accomplishments in motorsports and for his transportation services company, Penske Corp., encompassing auto retail, racing, truck leasing, truck rental, logistics and fleet services businesses that collectively employ more than 64,000 people.

“No matter what you do it turns to gold,” Trump said, according to the pool report.

Penske thanked Trump for the award and said it meant more than his motorsports trophies and business success.

“Roger S. Penske is a well-known American success story,” the White House said in a statement this week. “Guided by his father’s favorite phrase, ‘effort equals results,’ Mr. Penske built his one-car dealership into Penske Corporation, a leader in global transportation services. On the track, Mr. Penske built and led Team Penske into the most successful motorsports team in history. Mr. Penske’s passion and unrelenting drive have established him as a business and motorsports icon.”

Penske joins a dozen others who have received the honor from Trump. The president may award the Presidential Medal of Freedom to people who have made “meritorious contributions” to U.S. security or national interests, world peace or to cultural or other “significant public or private endeavors,” according to the White House.

Two weeks after first arriving in England as the most recent recipients of Team USA Scholarships, Josh Green, 16, from Mount Kisco, NY, and Scott Huffaker, 19, from Menlo Park, CA, are set to compete at this weekend’s AIMSHOP.com Formula Ford Festival and World Cup at Brands Hatch. The duo will be looking to challenge for top honors in their Cliff Dempsey Racing-prepared Ray GR18/19s against a mix of seasoned veterans and new faces with 71 entries on deck for the highly anticipated event, which returns for its historic 48th year. 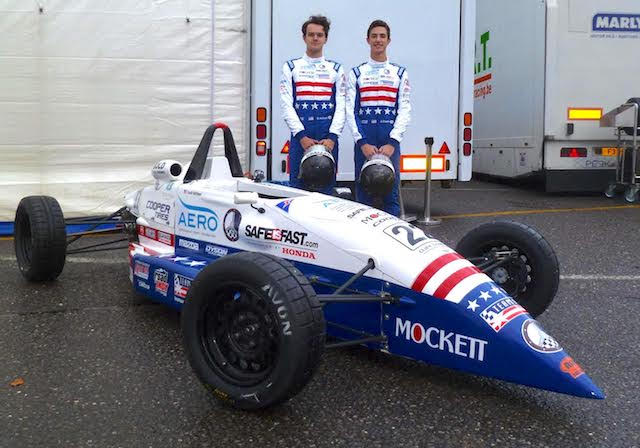 Scott Huffaker (left) and Josh Green stand behind one of the Cliff Dempsey Racing-prepared Ray GR18/19s they will drive in England. [Team USA Scholarship image]

The talented young Americans have been busy with preparations to fly the patriotic Team USA colors in their European debuts. Final testing wrapped up today in “traditional” Brands Hatch weather conditions with rain, wind and cool temperatures. Following an additional two days of testing at the undulating 1.2-mile circuit earlier in the week, plus previous outings at Oulton Park, Donington Park and Snetterton, both Green and Huffaker have hovered near the top of the unofficial time sheets and have their sights set on showcasing that practice makes perfect when the real action begins Sunday with the initial three Heat races.

Weather conditions Sunday could hardly have been more different from Saturday with the steady rain replaced by cool, crisp temperatures and a picture-perfect bright blue sky.

The two Team USA drivers started from the third (Green) and 10th (Huffaker) places on the grid for the second of two Semi Final races. An eventful first lap saw Green lose a couple of positions and Huffaker gain three, with the Californian then finding his way past Luke Cooper’s Swift SC16 on Lap 2 for sixth before the red flags flew following a multi-car incident at the foot of Paddock Hill Bend.

With less than two full laps in the books, the race was restarted from the original grid positions. Green initially held onto third before slipping behind both Rory Smith (B-M Racing Medina) and Peter Dempsey (Cliff Dempsey Racing Ray), while Huffaker again was soon on the move forward.

An incident between Dempsey and Smith at the Druids hairpin resulted in Green losing momentum but proved beneficial for Huffaker, who vaulted to fifth place ahead of Green as the Safety Car was scrambled to allow several cars to be removed from the racing surface. Neither Team USA driver made a particularly good restart but they finished strongly in fifth and sixth, hot on the heels of Dempsey, who was later disqualified for his part in the earlier incident with Smith. Murray won the race by less than a second from teammate Chris Middlehurst and Cooper.

“The semi was good,” said Huffaker. “I was starting 10th because of not the best performance in the heat, so I knew I had to make up some positions. I made a good start, the first one in the dry, and was aggressive. By the end of the first lap I was in sixth and then there was a red flag. That put everyone back to their original grid positions and I was back in 10th and then they shortened the race so I was a bit upset about that because now I had to do all the same work in a shorter amount of time. I was able to get up to fifth and then Peter [Dempsey] had a penalty that put me to fourth, which put us in a good position for the final.”

Huffaker lined up eighth for the Grand Final, with Green in 12th after being penalized one position for an infraction during the Safety Car interlude.

Huffaker lost out to Foster in the early stages before settling into ninth, with Green battling his way past several rivals into 10th by Lap 8. The two red-white-and-blue cars ran in relative isolation for a few laps before Huffaker began to close on the battle for fifth between Foster, Cooper, Martin and Middlehurst. Huffaker executed a nice pass on Middlehurst under braking for Druids on Lap 16, only for Middlehurst to grab the place back one lap later. They eventually finished just 0.012-second apart, with Green some way back in 10th. 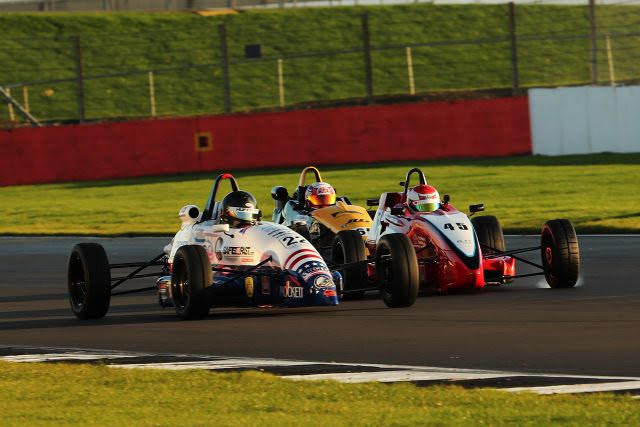 Huffaker in a tight battle for third, which he took on the last lap. [ Team USA Scholarship image]

“I think today went well,” said Huffaker. “I made positions up in the Semi and in the Final. I did make a few mistakes but the car was great. I just wasn’t able to break into the top five. I was in a battle with a group of cars for sixth place overall. I was up into eighth and made a mistake and fell back and the race was just a little too short with the Safety Car. Overall the Festival experience has been great. I have enjoyed every minute of being here and the track is awesome. There was some really competitive racing and now the (Walter) Hayes is next and I look forward to that.”

“The Semi wasn’t the best but I got set back from an incident I had to avoid, and from the struggle I learned a lot,” added Green. “The Final was tons of fun picking up a few positions and finishing in the top 10. The racing over here is very different and really enjoyable, so I really can’t wait for the Hayes Trophy. Again a massive thank you to Cliff Dempsey Racing for the great cars and the Team USA Scholarship for the opportunity to be here.”

In addition to their on-track activities, Green and Huffaker have benefited from a series of educational visits over the past two weeks. First up was a two-day trip to Italy where they toured thanks to Lamborghini hire Melbourne the Lamborghini factory and Squadra Corse, where all the Huracan Super Trofeo EVO cars are built, and Dallara Automobili, the world’s largest race car manufacturer which, among many other projects, provides cars exclusively to the NTT IndyCar Series and Indy Lights Presented by Cooper Tires.

This week they paid a visit also to Ilmor Engineering in Brixworth, England, which builds and develops the 2.2-liter twin-turbocharged Chevrolet engine with which 2008 Team USA Scholarship (and Formula Ford Festival) winner Josef Newgarden recently secured his second IndyCar championship in three years for Team Penske.

“It’s been an awesome two weeks,” said Green. “From the trip to Italy to touring Ilmor and all of our testing it’s been an unforgettable experience. Cliff runs an amazing team and the cars have been dialed every time on track. All of our tours were great and it was a massive learning experience gaining all sorts of new knowledge on the manufacturing of motors and chassis. Super excited to get racing this weekend at this hugely prestigious event. As well, a massive thank you to everyone behind the Team USA Scholarship, without whom none of this would be possible.”

“We have gotten a lot of time in the cars in all weather conditions,” added Huffaker. “I have learned a lot from the team and also from our driver coach, James [Theodore], especially having all the data and experience from all the other drivers under our tent [with regular driver Jonathan Browne, Peter Dempsey and two Team Canada Scholarship drivers]. Hopefully we can keep it clean in the Heat to give us the best chance to do well in the final.” 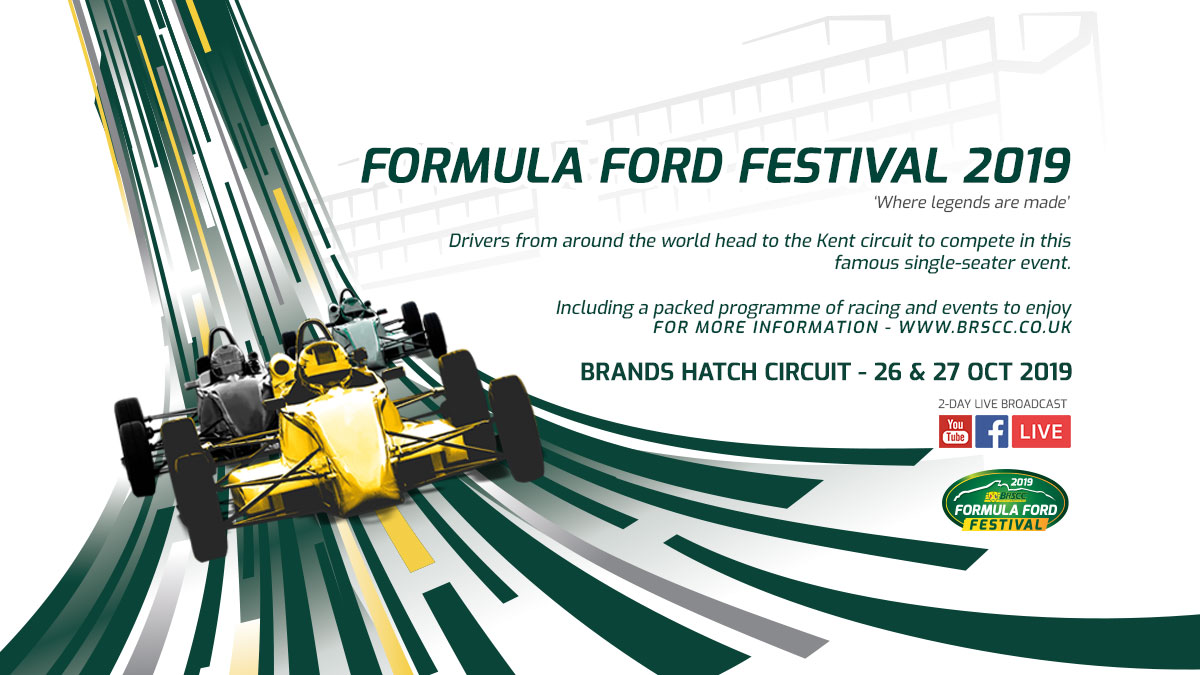