All five of the 2013 inductees into the Sports Car Club of America Hall of Fame have been members of the RRDC. Our President Bobby Rahal and Skip Barber will be inducted into the Hall on Saturday, March 2, during the SCCA National Convention at the South Pointe Hotel and Casino in Las Vegas. Three other of our members to be honored at that time – Carroll Shelby, Andy Porterfield and Bill Noble – have recently passed away. 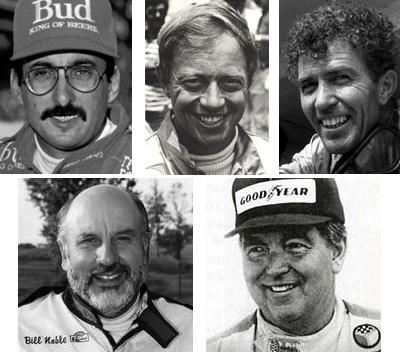 Rahal launched his driving career in SCCA Club Racing competing against the likes of Ken Duclos, Kevin Cogan and Jerry Hansen in the Formula B caldron, the precursor of Formula Atlantic. Rahal won the 1975 Championship in a March 75B, the first of many successes during his brilliant association with Jim Truman. Rahal also was the recipient of the 1975 President’s Cup, the most prestigious award offered by the SCCA.

Skip Barber also won in Formula B, taking the 1970 title in a Tecno and also the President’s Cup. It was his third consecutive championship having won Formula Ford the two previous Run-Offs. He has had a hand in the training of thousands of successful race drivers through the Skip Barber Racing School. Barber’s various open-wheel racing series have launched many brilliant careers.

Carroll Shelby was winning SCCA races all over the U.S. and Europe in the 1950s before an ailing heart took him out of the cockpit and put him in the business of creating brilliant cars for the street and racetrack. Shelby’s street/racing cars won nine SCCA National titles. One of his later creations was the Shelby Can-Am that competed in the SCCA in the early 1990s.

Andy Porterfield served the SCCA in many capacities including Director. He raced Corvettes and Camaros for three decades including back-to-back B Production National Championships in 1978 and 1979.

Bill Noble was “Mr. Formula Vee” both as a driver and as an engine builder. Noble won the FV national championship four times – 1979, 1982, 1987 and 1993. His come-from-behind drive in 1989, though falling short of the gold medal, garnered him the RRDC Mark Donohue Award.