THE ANNUAL RRDC AWARDS DINNER AND ONE HELLUVA PARTY

Bring together some of the greatest road racers of yesterday and today and you have a night to remember. This year’s RRDC Awards Dinner at Daytona Wednesday, Jan. 23, was one of those nights. 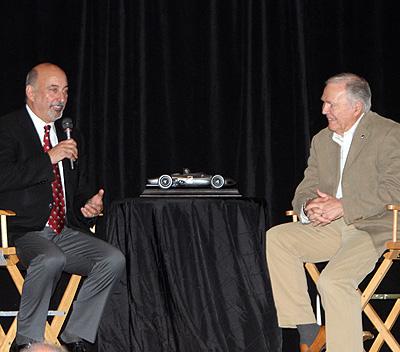 On hand were racing legends Bob Tullius, Hurley Haywood, Brian Redman, David Hobbs and Skip Barber – not to mention a legion of SCCA and IMSA Champions and the irrepressible Oscar Koveleski.

Chip Ganassi brought his entire team who went on to win the 24-Hour – Juan Montoya, Scott Pruett, Memo Rojas and Charlie Kimball. Plus Dario Franchitti, Scott Dixon and Jamie McMurray. Montoya and Rojas are in this year’s membership class. 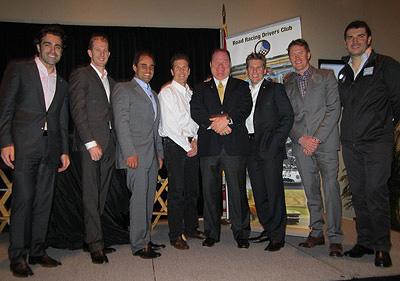 The honoree of the evening and recipient of the RRDC’s Phil Hill Award was Peter Brock – designer of the iconic Daytona Cobra Coupe, founder of BRE and ultimate automotive innovator.

During his inquisition by our president Bobby Rahal (Letterman may start taking notes), Brock revealed the real inside stories behind the Cobras, how he dealt with the “suits” in Detroit and how he created a breakthrough automotive design portfolio in the parking lot of LA Art Center – just to gain admission.

Sorry if you missed it. But there’s always next year.

Here is a recounting of the three RRDC award presentations.

In his opening remarks, Rahal said, “Phil Hill represented everything that was great about the American spirit internationally. He was the first U.S. F1 champion and multi-time winner of LeMans. He was a gentleman in the finest sense of the word. 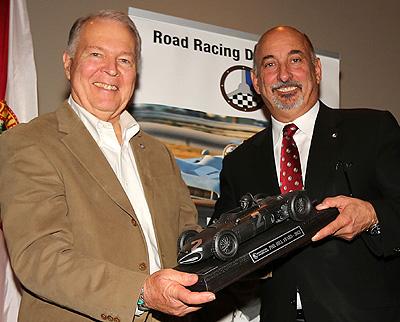 “Tonight’s recipient is a big Phil Hill fan. I read his bio on Wikipedia and I said to myself, ‘What didn’t this guy do?’ On behalf of all us at the RRDC I can’t think of a greater recipient than Peter Brock for the Phil Hill Award.”

“It’s an incredible honor to receive this award because of the people who have received it before. I really feel humbled,” said Brock. “Phil Hill was such a dear friend and my hero from the very beginning because I saw him win in 1951 at Pebble Beach when I first got interested in racing, and followed his career right to the end. So, this award is a very personal thing. It’s going to be treasured in my house.”

Born in 1936, Brock grew up in northern California and by age 12 was a total car nut. He and his dad started making the trek to Pebble Beach in 1951 and the following year he found his hero.

“Phil HIll was driving a wild MGTC special with a supercharged V8 60 flathead engine and I was hooked for life,” Brock said. “It was the perfect mechanical amalgam of hot rodding, which was the focus of my life at that young age, and the whole new sport of road racing.”

While still in high school, Brock built a show-winning Fordillac.

A prodigy, he moved from Stanford to the Art Center School in Pasadena where he was recruited by GM Styling Division’s Chuck Jordan and at 19 was hired – the youngest GM designer ever. In 1957, one of his sketches was tabbed by GM VP of Design Bill Mitchell to become the next Corvette – the Stingray.

Of Brock’s many projects, the Shelby Daytona Cobra Coupe may be the best known.

Leaving GM in ’59, Brock eventually landed with Carroll Shelby, developing the Shelby American brand. In an odd moment, Brock wound up designing and building the iconic Shelby Daytona Coupe – in three months. Despite the rush, the car was brilliant in both looks and performance, winning the 1965 FIA World GT Championship.

Brock was now ready to be his own boss launching a design firm as well as a race team – Brock Racing Enterprises. With John Morton behind the wheel, BRE’s Datsuns soon dominated SCCA competition with C Production National Championships in ’70 and ’71 in a 240Z and the first two Trans-Am Under-2.5 titles in ’71 and ’72 in a 510.

In the meantime, Brock was instrumental in building Ultralite Products into the largest hang-gliding company in the world.

Since then, he’s been an instructor at the Art Center School of Design, authored the definitive book on the Daytona Cobra Coupes and designed the Aerovault – an aerodynamic car trailer.

In 1999, Brock partnered with Hi-Tech Automotive in South Africa to create a modern version of the Daytona Cobra Coupe. Over 150 of Brock or Superformance Coupes have been sold. Brock admits he got into that project to correct all the mistakes that were made with the original Shelby project due to the tight schedule and the constraints of the racing rules. 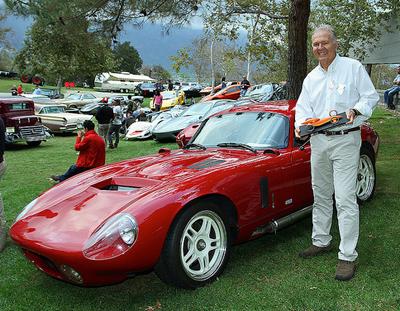 The Brock Daytona Coupe and its creator.

Today he lives in Henderson, Nev., with wife Gayle, working together as freelance automotive writers and racing photographers.

Cliff White won a wheel. That’s the traditional configuration of the Mark Donohue Award for which White is the 42nd annual recipient as voted on by the RRDC members attending the 2012 SCCA Run-Offs at Road America in October. White drove a spirited but well calculated race to win the Spec Racer Ford title, taking the lead for the final time coming to the checkered flag. 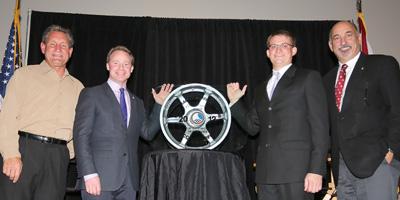 “There are two important aspects to being eligible for this award,” said Donohue. “One, you don’t have to actually win the race or be the champion, and the other is the winner is chosen by RRDC members, who view each race and can identify each driver’s talent and effort.”

Schroeder, who is a regular on Speed TV’s coverage of the Runoffs, said that the RRDC members present “take this award very seriously.”

Knowles, who chairs the Donohue Award selection committee, watched White’s drive to victory from turn 13 and then on the live computer broadcast. “Cliff and the other three SRF frontrunners ran what is almost unheard of – a clean Runoffs race! Three leaders on the last lap with Cliff coming from fourth to first – a real tough tactical battle. Winning the arm-wrestling contest with that field is a great driving accomplishment.” 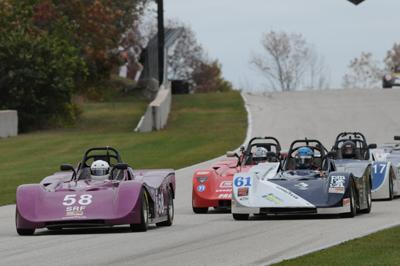 One of a half dozen times Cliff White (58) led the madding crowd at Road America in October. [Mark Weber Image]

White, 26, is a CPA from Huntsville, Ala. and runs the family business. “This is an incredible honor,” he said. “My crew chief told me to not let these guys push me around anymore and it worked. And I have to thank my parents and my grandmother for being here and supporting me. Everybody in this room knows that you have to start somewhere in racing and most everyone got their start because of their parents. So, thank you very much.”

Best known to the motorsports industry as steward of the world’s most eclectic assortment of important racing cars, Miles Collier is the 2012 recipient of the Bob Akin Award.

The distinctive trophy was designed by Steuben Glass in Corning, N.Y., to honor the memory of longtime RRDC member and past president Bob Akin, who lost his life in a racing accident at Road Atlanta in 2002.

Considered the top award for amateur, vintage/historic or semi-professional drivers, the recipient is selected by Akin’s son Bobby and two other RRDC members – Brian Redman and Archie Urciuoli – with the approval of RRDC president Rahal. 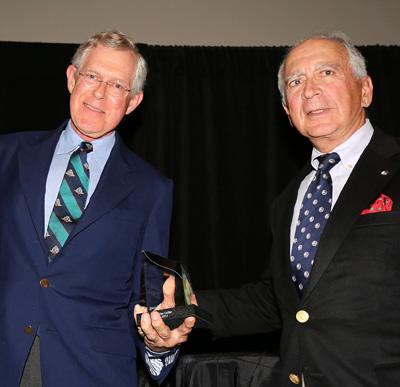 Bobby Akin was unable to attend this year but sent this message: “Miles had done more for the sport he loves than I could hope to recount. If I had to point out one thing that I find truly amazing is that Miles is constantly providing priceless cars to countless historic events so that people can enjoy seeing these cars race, often in the hands of some of the great drivers of our time – RRDC members Brian Redman, Roger Mandeville, John Morton, et al – all on his time and his financial risk. Sometimes they don’t come back just the way they left the shop. My guess is Miles says, ‘Well, it needed some work anyway.'” 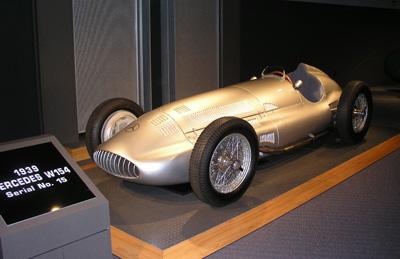 This pristine 1938 W154 Mercedes Grand Prix car is a recent addition to the Collier Museum Collection.

In making the presentation, Urciuoli echoed Akin’s admiration for Collier’s efforts to preserve these great racecars. “Everyone who has had the pleasure of visiting his museum in Southwest Florida – as I have on several occasions – will be awe-inspired by the great machinery there. It’s a real tribute to our sport, I think, that some of these cars which are priceless actually get out and get exercised on the race track in the way they were meant to be.” 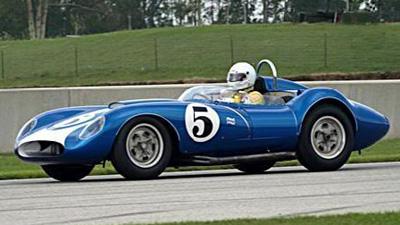 Collier is an artist, an investor, a philanthropist, a former amateur racer and most certainly a noted authority on historic automobiles and racecars. He is the founder of the Revs Institute for Automotive Research in Naples, Fla., which includes the Collier Collection, housing more than 100 important historic cars and bicycles from around the world.

For the past ten years, Collier has conducted a biennial symposium on Connoisseurship and the Collectible Automobile that brings together automobile collectors and faculty from around the world to discuss critical issues in collecting and preserving important historic automobiles.

[Tom Davey and Judy Stropus contributed to this story]