THREE NEW BOOKS BY AND ABOUT RRDC MEMBERS 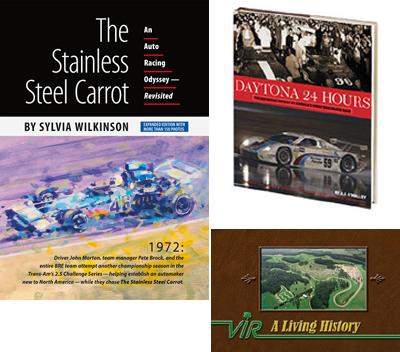 First published in 1973, The Stainless Steel Carrot chronicles 18 months plucked from the early career of John Morton. In the first edition cover note, author Sylvia Wilkinson describes Morton as a consistent winner in one of Peter Brock’s BRE 2.5 Datsun 510 sedans awaiting “the chance to prove himself in a faster car. When at last he gets it, neither the money nor the technical experience available are adequate. The formula car – the “carrot” dangled in front of his nose for so long – evaporates in a mass of tangled and twisted steel.” 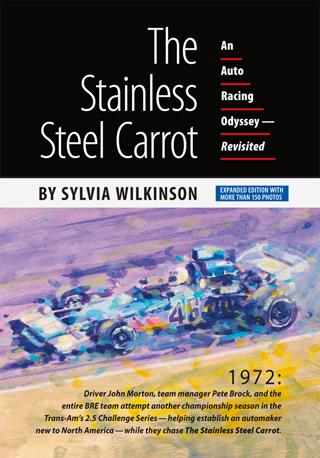 In this Revisited Edition of the classic motor racing book, Wilkinson has added a new 45-page chapter catching up with many of the people who made the BRE team successful and the book so compelling, including John Morton, the team’s number one driver, who went on to race professionally for now close to 40 years. This new 368 page edition includes 32 gloss pages and more than 150 photos — many in color. Numerous photographers have contributed to cover the subject well, though the author and publisher would especially like to thank Stan Sholik for his contribution of photos capturing the BRE team of the early 70’s and the career of John Morton for ensuing years.

When Dan Gurney coasted his crippled Lotus Climax 19B to victory in the inaugural Daytona Continental in 1962, he began a tradition of dramatic finishes that have characterized Daytona competition ever since. In Daytona 24 Hours: The Definitive History of America’s Great Endurance Race, J. J. O’Malley chronicles the complete history of the Daytona 24 in 46 year-by-year chapters illustrated with rare, color and black-and-white photographs, many of them never before published. 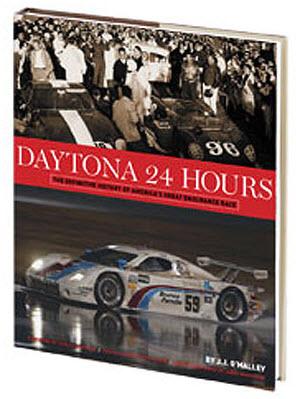 Originally published in 2003 and co-authored by Buz McKim, this newly updated edition by O’Malley adds five more chapters and scores of additional photographs, as well as a revised driver index and race results tables, plus 386 color and 94 b/w photos.

Bill King, longtime motorsports publicist and journalist, recently completed the first installment of VIR – A Living History. “Part 1: The Early Years (1956-59)” chronicles the lush plot of southern Virginia land from the 1800s through its transformation into a very fast and technical race track and its first three tumultuous years of competition.

The history will be published in four serialized installments, taking us to the present. The sections are in loose-leaf format on 10″ X 16″ pages to be clipped into an official binder. A coffee table version is planned for later. Following that annual updates can be clipped into the back of the binder – thus, A Living History. 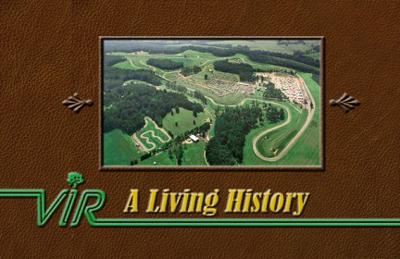 “In Part 1, I’ve put the track’s emergence into the context of road racing in 1950’s America,” King adds. “There are lots of old photos – 76. Emphasis is on the founders and on the racing stars of the day, many of whom were early members of the Road Racing Drivers Club.”