Sir Stirling Moss is not only a racing legend but a British national treasure to boot. Moss was one of a young Sir Patrick Stewart’s heroes. That the BBC would employ the Shakespearean actor and Star Trek star to trace with Moss his brilliant career for its “Racing Legends” series was a stroke of inspiration. 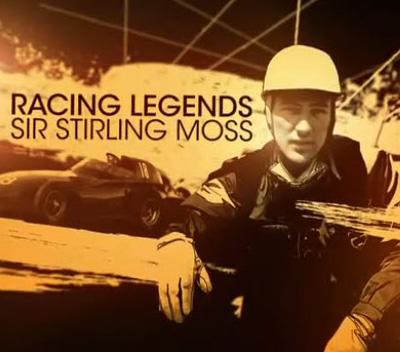 Moss invites Stewart to the Mayfair flat in central London he has called home for more than 50 years. It’s their first meeting although Stewart admits that he’d actually found where his idol lived years earlier. The pair peruse a few of Stirling’s voluminous scrap books and then take the Austin in which Moss had learned to drive at age six out to the Moss family home on the Thames for a look about.

Throughout the BBC has compiled an astonishing array of vintage footage to illustrate the story as it unfolds. They drive a 300SL gull-wing along the route of the Mille Miglia where in 1955 Moss scored one of his signature victories for the Silver Arrows. 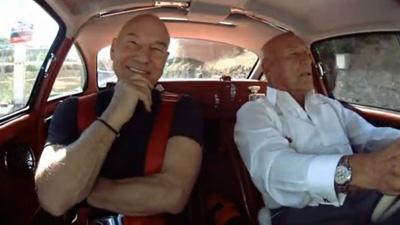 Moss’s recollections of the event are crystal clear, and he relates them with bemused candor. He credits co-driver and navigator Denis Jenkenson’s mastery of the roller map that tracked the pace notes as the key to victory. 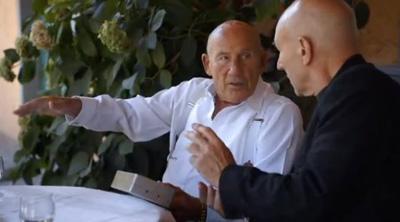 Moss is completely open about his F1 career where his truculent first meeting with Enzo Ferrari in the early 1950s put a chip on his shoulder. For years he refused to consider driving for El Commendatore, chosing to race unreliable British cars instead – a decision that probably cost Moss a championship or two.

Finally in 1962, Mr. Ferrari was so anxious to have Moss drive one of his cars that he agreed to give his team owner Rob Walker a Ferrari for the season, but before it was delivered Moss suffered his career-ending crash at Goodwood. 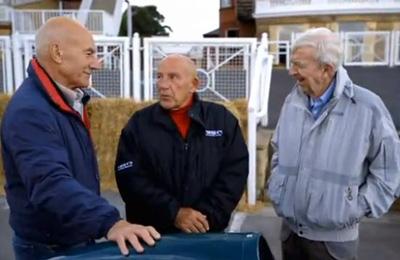 Stewart listens intently as Moss and Tony Brooks talk to him about the Vanwall he is about to drive. [BBC image]

Stewart realizes a dream when he gets to drive the Moss/Brooks Vanwall at Aintree where in 1957 Moss took over Brooks’ car and scored the first victory by a British driver in a British car in the British Grand Prix. Moss and Tony Brooks are on hand to give Stewart pointers and he brings it back alive and unscratched.

Does Moss have regrets? He most certainly does. He dwells at length on what he thought his career might have been had he had several seasons aboard the Walker Ferrari. Although his place in the upper echelon of racing drivers through the years is secure, Moss – in his heart of hearts – would have preferred to have the actual championships to put paid to the sentiment.

This is a fascinating journey that you must take.