RRDC members were out in force at the 18th annual Amelia Island Concours d’Elegance in Florida last weekend, a magnificent event conceived by RRDC member Bill Warner. The all-for-charity automotive extravaganza continues to grow in attendance and splendor each year. Our man Sam Posey was this year’s Grand Marshal. 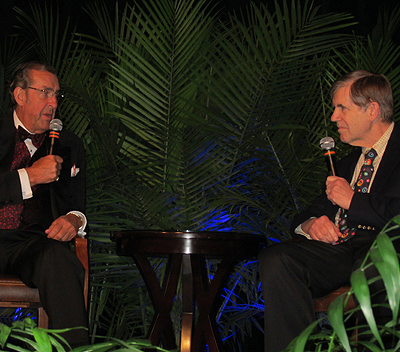 The Amelia Island annual gathering features motorsports seminars, cocktail parties, car auctions, galas, a silent auction, autograph signings, drives in luxury marques, such as Aston-Martin, Porsche, Lamborghini and son will get new Maserati, and showcases some of the most important vintage cars in the world.

The weather was perfect and the Ritz-Carlton on the Atlantic Ocean was a gracious host to the many racing celebrities and automotive dignitaries in attendance. More than 20,000 people were on hand to view 287 cars and 21 motorcycles at the Concours on Sunday, which also featured the “Cars of Sam Posey” and an array of historic Ford GT40s. The event benefited the Community Hospice of Northeast Florida, Inc. 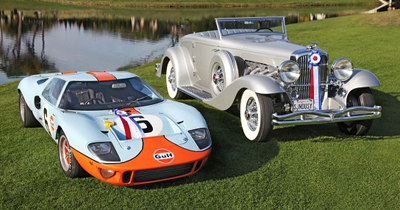 On Sunday, the top Concours d’Elegance award went to a 1936 Duesenberg SJN, while the Concours de Sport went to one of the celebrated marques, a 1968 Ford GT40. [Amelia Island Concours image]

RRDC member Posey – a racing driver, artist, designer, author and TV commentator – was the event Grand Marshal and was honored at the Saturday night gala, where he and his old friend (and RRDC member) David Hobbs continued their friendly rivalry that began in the ’70s. As expected, the barbs between them flew, entertaining the capacity crowd.

RRDC member Bob Varsha was the emcee and RRDC member Skip Barber stunned Posey and his family (including brothers David and Nick Moore, with their wives Debbie and Leslie and children, Sam’s wife Ellen Griesedieck and their children Judy and John) with a proclamation that from this day forward the front straight at Lime Rock Park in Connecticut would be called the “Sam Posey Straight” – a deserving accolade for the man who began his racing career at that track and was the first to break the one-minute mark on the 1.5-mile course. 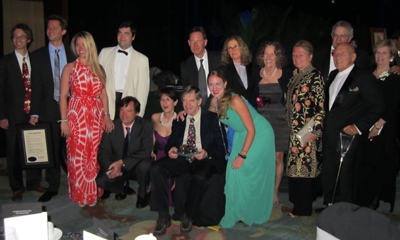 The Posey clan gathers around Sam and Ellen as Stirling and Susie Moss stand to the right just in front of Amelia Island founder Bill Warner and his wife Jane. [Judy Stropus image]

The Design Analysis of the Corvette Sting Ray, the 50th Anniversary Celebration of the Porsche 911, and the Celebration of Ford’s GT40 were the subjects of the three seminars, which attracted over 400 people at each of the talks, filling the Ritz-Carlton’s Talbot ballroom to capacity.

Hobbs and RRDC members Brian Redman, Dan Gurney and Bob Bondurant were on the panel for the Ford GT40 seminar and rest assured there were many racing war stories that were shared among these A-list racers. Gurney didn’t fail to place jabs into Hobbs’ side as they revealed the inside stories of their Le Mans’ experiences. They were joined on the panel by John Wyer team manager John Horsman, and Lee Holman of Holman Moody. 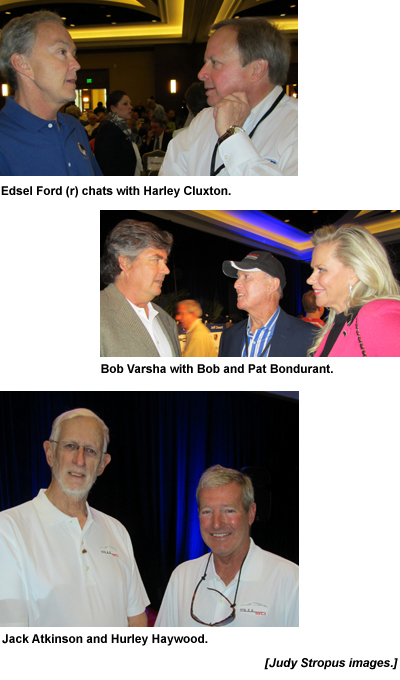 We congratulate Bill Warner on another magnificent weekend. The passion and energy he expends to put on this extremely well-run show annually is clearly evident in the faces and laudatory remarks of the attendees. With so many volunteers eager to be a part of this spectacular affair year after year, the charities are the beneficiaries. We applaud all of Bill’s efforts.