A crowd of 350 representing all forms of motorsports from NHRA to INDYCAR and sports-car racing turned out for the RRDC Evening with Brian Redman presented by Firestone Thursday evening, April 18. This was the Road Racing Drivers Club’s fifth consecutive annual banquet held prior to the running of the Toyota Grand Prix of Long Beach.

RRDC president Bobby Rahal conducted a spirited interrogation of Redman, in the style of the Late Show with David Letterman, which educed a number of previously-unheard accounts from Redman’s storied four-decade career as a sports-car, Formula 1 and F5000 racer.

RRDC member Sam Posey’s elegant video tribute to Redman, who won the F5000 race at the inaugural 1975 Long Beach Grand Prix, was one of the evening’s highlights, while RRDC member David Hobbs’ video ragging of his longtime friend brought the expected laughter to the room.

Other videos recalled Redman’s racing successes as a driver over the years for several manufacturers, including Ferrari, Porsche and BMW. Porsche and BMW joined Firestone and Honda to support the evening’s festivities. (An edited video of the proceedings will be posted soon on www.rrdc.org.) 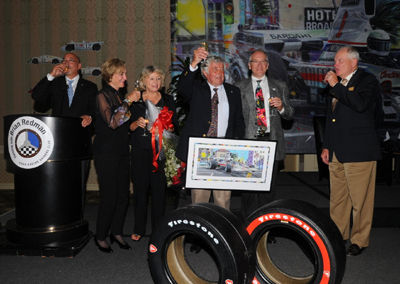 Some adult beverages were consumed in celebrating the RRDC’s Evening with Brian Redman. The celebrants are (l-r) Bobby Rahal in full swig; Patty Queen who presented Redman his 1975 Long Beach-winning trophy; Maid Marion and Brian; artist Randy Owens who did the backdrop mural (that’s the original that Brian’s holding); and Jack Queen, an original investor in the Long Beach Grand Prix. [Dennis Ashlock image]

“As a teenager going to Sebring and Watkins Glen in the late ’60s and early ’70s I got to watch Brian drive against the best drivers in the world,” said Rahal. “He was clearly one of them. He was an advocate for me early in my career, and I had nothing but the greatest admiration for him as a driver and as a human being. As a race-car driver I look at what he’s done and I think, man, I wish I could have done just half of that.

“He’s a super guy and is such a humble person,” Rahal continued. “He never sought the spotlight and yet he achieved successes that most of the best race-car drivers in the world never did. It was kind of a best-kept secret. Hopefully after tonight that secret is no longer such a big one. I’m really pleased that so many people came out to celebrate him.”

“I think this evening was really fantastic, especially following in the paths of the previous honorees,” said Redman, alongside Marion, his wife of more than 50 years. “I never put myself in their category, so it’s a great honor. I’m absolutely delighted. The RRDC has evolved and is continuing to evolve into a really major force in the world of motorsports. Congratulations to Bobby and the members of the RRDC.” 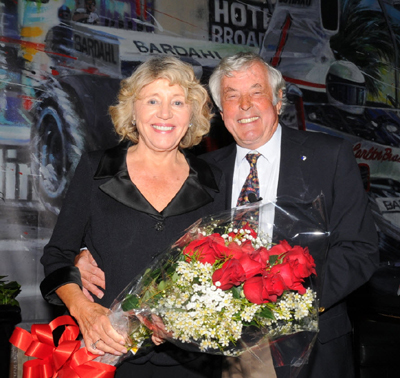 Brian hugs his bride Marion who hugs a beautiful bouquet sent to them by Pat and Bob Bondurant who were unable to attend. [Dennis Ashlock image]

The proceeds from the dinner help support the RRDC’s young driver initiatives, including its groundbreaking SAFEisFAST.com program and the Team USA Scholarship, which the RRDC has backed since 1997.