Tom Kristensen posted his record-extending ninth victory in capturing the 90th running of the 24 Heures du Mans Sunday. His fellow RRDC member and co-driver Allan McNish scored his third win at the iconic Sarthe circuit in western France. The normal unbridled joy was overshadowed by the tragic death Kristensen’s fellow countryman Allan Simonsen during the first hour of the race. 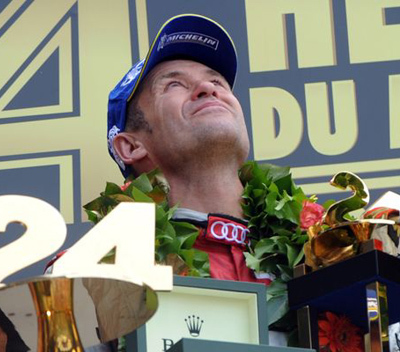 With Danish flags around the podium at half-mast, Kristensen explained that his intended tribute to his father should he win did not seem appropriate under the circumstances. “He can wait for the next victory of mine,” said a tired and saddened Kristensen. “This victory today I dedicate to Allan Simonsen, a great fellow Dane.” 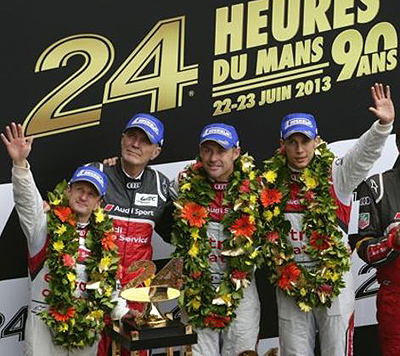 McNish had placed the No. 2 Audi E-Tron Quattro Diesel Hybrid on pole and Kristensen brought it to the checkered flag. Loic Duval was the third driver. It had been five years since the Dane last won the twice-around-the-clock classic.

Roger Penske has a hard time giving up on his people – thus a second chance for A.J. Allmendinger in a Team Penske machine. With seven laps to go, Allmendinger took the lead in Saturday’s NASCAR Nationwide Series at Road America and held on through a pair of green-white-checker overtimes to score his first win in NASCAR. 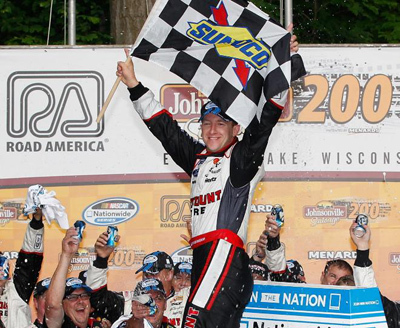 Speaking of his second chance from The Captain, Allmendinger said, “It’s just meant the world to me. This was the only way I could repay him.”