The RRDC lost one of its oldest members with the passing Sunday July 7 of Chuck Dietrich at the Providence Care Center in his hometown of Sandusky, Ohio. He was 88. 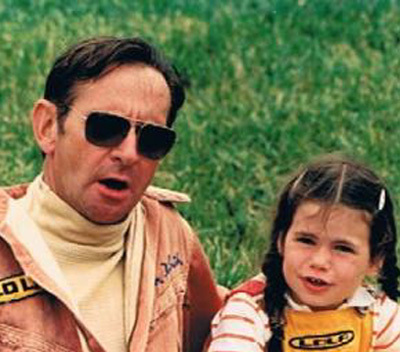 Chuck at the track with his daughter. [Dietrich family image]

Chuck, who began racing an MG-TC in 1948, was voted into the RRDC in 1958. He won the first of two SCCA National Championships driving Bobsy creator Jerry Mong’s prototype Mark 2 to the 1963 G Modified title. In 1967 he won the Formula B championship at the Daytona Runoffs. A 50+ year member of the SCCA, Dietrich held the honorary number 1 National license.

His accomplishments include winning 10 straight SCCA National races and nine Central Division class championships. He was the GT class winner at the 1969 12 Hours of Sebring and the 1970 24 Hours of Daytona.

Dan Carmichael was one of Dietrich’s best racing friends. Dan’s son-in-law Mike Rand offered these thoughts. “Chuck for many years was the winningest driver ever at the Mid Ohio Sports Car Course in Lexington, Ohio.

“A fierce competitor in any car in any arena from Can-Am in the late 1960s through to Historics in his more recent years, always with a mischievous grin, Charles was never one to be ignored on the race track.”

A WWII Navy veteran, Chuck owned and operated Dietrich Motor Sales in Sandusky until his retirement. He is survived by his wife of 40 years, the former Jane Kishler; one daughter Jane Liles of Huron, Ohio; one granddaughter Sarah Bickley of New York City; and his brother-in-law Jim Kishler of Newark, Ohio.

At Chuck’s request, cremation has taken place. Memorial services will be announced at a later date.

Memorial contributions may be made to the Shriners Hospital for Children, 3229 Burnet Ave., Cincinnati, OH 45229-3095 or to the donor’s favorite charity. Condolences may be shared at Pfeil Funeral Home’s Web site.