This year marks the 50th Anniversary of the SCCA National Championship Runoffs currently running at Road America. The inaugural Runoffs – the American Road Race of Champions –were held at Riverside Raceway in 1964, sponsored by Car and Driver magazine. 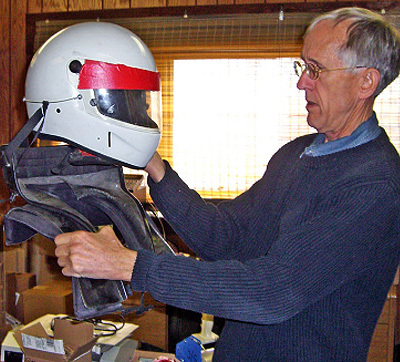 Jim Downing was not wearing a HANS device when he captured the pole for the inaugural Formula Vee national championship race at Riverside in 1964.

The RRDC celebrated the event’s golden anniversary with a dinner Wednesday night at Road America’s Motorplex catered by the track with assistance from Christi Sadiq and sponsored in part by Hoosier Tire. Some 45 folks attended including 18 RRDC members, spouses, crew and friends.

In honor of the 50th running of SCCA’s national championship event, the club offered former champions not otherwise qualified an entry. And several RRDC members took them up on it: Dave Weitzenhof – seven-time champion in multiple open-wheel classes – will run a FV on loan from Lisa Noble; Mike Rand – ’70 FC titlist – will drive a Crossle FF; and John Morton – ’71 and ’72 CP champion in a BRE Datsun 240Z– has entered a replica 240Z, now in EP.

Features of Wednesday evening’s festivities included recognizing that our own Jim Downing, entered this year in a CSR, qualified on the FV pole for the inaugural ARRC at Riverside. FV was group 1 and Downing took the first official Runoffs green flag. Augie Pabst told of racing his Meister Brauser Scarab, and new member Andrew Aquilante, 2013 pole sitter in both T1 and GT2, was introduced to the group. – Don Knowles