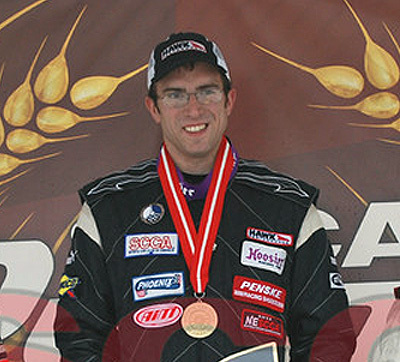 Andrew Aquilante swooped to a pair of SCCA National Championships at the 50th Anniversary of the Runoffs. [SCCA image]

Aquilante celebrated his recent acceptance into the club with a pair of convincing victories. Starting from the GT-2 pole Friday, Aquilante was in a fight for the lead until Turn 5 when he slipped through for good, withstanding a caution period, to claim his second ever National Championship to go with his Touring 1 title from 2007 when he also was awarded the President’s Cup.

Members Pete Peterson and Jim Goughary completed only 7 laps of the GT-2 race and were classified 14th and 15th respectively.

After taking pole for the Touring 1 race in the No. 36 Phoenix Performance Corvette, Acquilante once again coughed up the lead on the start but gained it back in Thunder Valley on the opening lap and drove away to a convincing 34+ second victory despite another three-lap caution period.

John Heinricy on his way to a 12th Runoffs gold medal. [SCCA image]

John Heinricy claimed his 12th SCCA national title after post-race inspection uncovered technical infractions leading to the disqualification of the first two finishers in American Sedan. It was Heinricy’s fifth championship in the AS class.

Another brand new member Steve Sargis, was the only other RRDC member to appear on the podium, the seven-time national champion taking third in GT Lite in a Spitfire. Member Kent Prather placed 11th in a Mazda Miata. 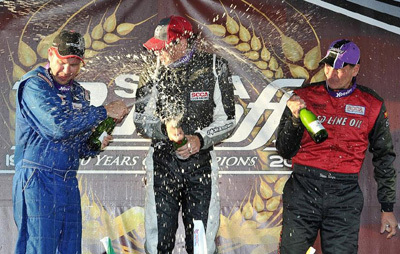 Four other RRDC members joined Morton as special invitees. Jim Downing drove the Peach Day 02 Mazda to an 11th place finish in C Sports Racing while Dave Weitzenhof was 23rd in Formula Vee in a Vortech FV. Mike Rand placed 18th in Formula F in a Crossle 30F Honda and Jerry Barker was 21st in F Production in – what else – a Spitfire.