Lawrence Loshak, 36 of Grafton, Wis., is the 2013 recipient of the Mark Donohue Award, presented annually by the Road Racing Drivers Club for outstanding performance, competitiveness and sportsmanship during the SCCA National Championship Runoffs. 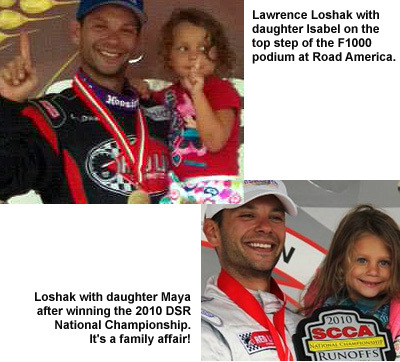 Maya Loshak (lower right) ran to the podium and jumped in Daddy’s arms after Lawrence Loshak won the 2010 DSR national title. This year, Isabel (upper left) said she wanted to do what her big sister did, and she did it. [SCCA images]

Loshak won two SCCA championships on Friday, Sept. 20 at Road America in Elkhart Lake, Wis. – Formula 1000 and H Production. His outstanding Formula 1000 drive from last to first on a wet track was judged the performance of the weekend by the 20 RRDC members present who constituted the Donohue Award selection committee.

Loshak’s brand new and very quick JDR ETE REMAN/Moon’s Super Cycle Suzuki had won him the Formula 1000 (aka Formula B) pole, but car would get a real workout when the green flag dropped. A misinterpretation of the published start time basically flummoxed Loshak’s crew, who read the green flag time as grid time. Going from being a leisurely early to a frantic very late, the crew thrashed to get Loshak tucked in at the tail of the 21 car field. And it was raining.

Loshak on a sunny day winning pole for the F 1000 National Championship race, which he would win from the back of the pack in the rain. [Mark Weber image]

“I didn’t even realize I’d passed 16 cars on the first lap,” said an unworried but obviously amped-up Loshak, “Then it was hunt, catch and pass until they waved the checkered flag. Somehow I took the lead at Corner 5 on what turned out to be the last lap, but I had no idea where I was in the race or what lap it was.” In their haste to get the JDR on the track without penalty, the crew had failed to hook up Loshak’s radio. “I was just looking for the next car or the checkered flag.”

Although he’d won pole by less than a second at a record 2:04.786 and first FB in the fours, Loshak posted a race lap of 2:29.859, a solid five seconds quicker than anyone else on the wet track and a testament to his ice racing experience.

With his wins in F1000 and HP, Loshak joined the exclusive company of Jerry Hansen, John Heinricy and Tom Schweitz as the only drivers to win the Runoffs in four different classes in its 50-year history. He also became the 17th driver to win two Championships in the same year. New RRDC member Andrew Aquilante became the 18th on Sunday. Loshak’s season also included two SCCA triple crown victories and the USF1000 Championship as well, perhaps a first for that combo.

Loshak on his victory lap after winning the H Production title later in the day Friday. It was his fourth SCCA National Championship. [Mark Weber photo]

“I would not be in this position today without the help of a whole lot of people over the years,” Loshak said. “My engine builders – Greg Moon for my Moon Supercycle GSXR1000 Suzuki and Bob Uszler for my Rapid Fyre Honda. Greg and Bob turn out very quick and very reliable powerplants, and you know how drivers feel about horsepower. I also want the give a lot of credit for a successful career to date to my racing mentor and business partner, Mikail Shaknovich, my father, my family, my friends and my amazing crew. So many to thank. Jerry Hodges and Don Connor for picking me up to driver their JDR F1000. And, of course, the SCCA, the volunteers and workers. A million thanks isn’t enough.”

RRDC President Bobby Rahal said, “Lawrence Loshak has become one of SCCA’s top club racers in just 10 short years and already has won four national championships. Recovering from the self-inflicted wound of being late to the grid, he put his head down and drove a remarkable catch-up race from the back on a wet track with no radio and no idea of his progress,” Rahal continued. “It’s the kind of performance we look for in a Mark Donohue Award winner – no quit, difficult conditions, great concentration – a race Mark might have driven.”

Loshak started autocrossing an American Sedan in 1996. His goal was open wheel, and he attended the Winfield Academy where he finished a close second in their World Challenge. “I weighed 200 at the time” Loshak admitted. “The guy who beat me by 2/10ths of a second was tiny. I now weigh 160.”

He tried his hand at sprint cars and ice racing before settling on an E Production Honda Prelude that needed development. “We had it right in ’05, but got punted out of the lead on the last lap,” he said. “Then we won in ’06 and were leading from pole in ’07 when a tire went down.”

Loshak moved to D Sports Racing in ’10 and won the Runoffs from pole in a Stohr WF1 Suzuki. “Then I got a phone call from these two guys – Jerry Hodges and Don Connor – to drive this new car they were building for Formula 1000,” he said. “It was my first real shot at my dream of racing an open wheeled car and we had a great season – Runoffs pole, track record, win on last lap, the triple crown, the Donohue. Unbelievable. It hasn’t sunk in yet.”

And this is not to mention his win in H Production in a much-decorated Honda CRX. “That car runs out of our shop, Hyperformance, which is across the street from David Hobbs Honda. It’s won more than 20 races and now three championships with three different drivers out of our camp. It’s an amazing little car. “This year it was my turn!”

Loshak loves the infant Formula 1000 class. “The cars are only about three seconds off Formula Atlantic times at Road America,” he said. “At first, most of the cars were converted Van Diemens and Citations, but now people are beginning to build new cars to the formula’s specs – 1000 pounds, 1000 cc engines, no carbon fiber. You can buy a used engine off eBay for twenty-three hundred dollars, have it refurbished and dyno tuned, and have a race engine and gearbox for under six thousand dollars you may just need a few gearbox repairs but after that it should be ready to go and just like that you can put a brand new competitive car, on track for a quarter of what it costs to run an Atlantic.

“People ask me why I don’t go pro. The more I race, the more is see that most of the pro field is paying to be pro. Not something I want to do. The most important thing to me about racing is winning. So I’m going to go as fast as I can afford to go. The competition in SCCA is up. There were three national champions in the F1000 field. It’s great competition. Great speed.”

The Donohue trophy this year features a rear wheel from one of Bobby Rahal’s Team BMW RLL BMW Z4 GTEs running in the ALMS GT category.