In the first of two weekends of the most intensive competition, 2013 Team USA Scholarship winners Joey Bickers and Jake Eidson got everyone’s attention at the 42nd running of the Formula Ford Festival at Brand Hatch. 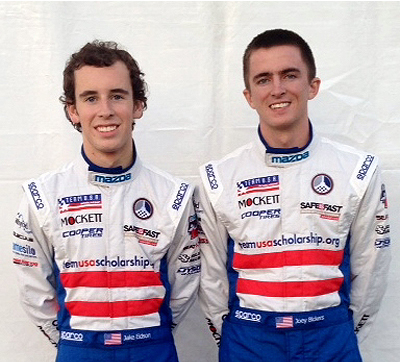 The pair got their first look at the Cliff Dempsey Racing Ray FF1600 cars on Thursday (Oct. 24) with a shakedown test at Donington Park. They had a second test Friday at Silverstone National before moving on to Brands Hatch.

Dempsey’s assessment was encouraging: “I couldn’t be happier with Joey and Jake. Our first day was at Donington to sort out any problems with the cars or the drivers. We had a few minor issues but the next day at Silverstone was extremely productive. The boys logged time in both the wet and the dry and Jake set an amazing time on old tires.”

That wet session at Silverstone really helped Bickers who had never run in the rain. The opening practice at Brands Hatch featured a wet track, and Bickers surprised himself by posting quick time for the session. 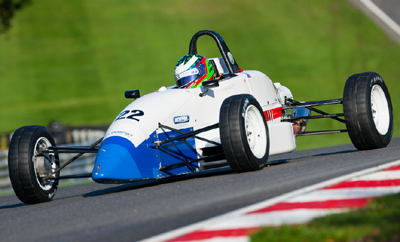 Bickers drew Group 1 for qualifying Saturday morning for the two afternoon Heat races that would determine the 28-car field for Sunday’s Festival race. Eidson (pronounced EDD-son) was in Group 2. Again on a wet track, young Bickers managed a very respectable fifth for Heat 1 with Eidson slotting in third to start Heat 2.

The track was fully wet again by the time the Bickers 12-lap Heat 1 race began at a little after 2:20 pm. Veteran Joey Foster sped away immediately into the lead and was never seriously challenged. Making his very first standing start and competing for the first time ever in the rain, Bickers made a fine getaway from the third row to leapfrog ahead of Canadian Zacharie Robichon at the first corner.

Scott Hargrove, who recently clinched this year’s Cooper Tires USF2000 Championship Powered by Mazda, found a way past Niall Murray on Lap 5 but made an error at the notorious Paddock Hill Bend on the following lap which enabled Bickers to slip through into third. Then, on Lap 10, Bickers executed a bold pass on the entrance to Clearways. Murray attempted to hold his ground on the outside line but it was he who came off worst when the two protagonists briefly made contact, and Bickers was through into second place where he stayed.

Eidson after incurring a 5-grid-spot for “failing to respect the track limits” fired off the fourth row on the start picking up two positions on the opening lap, one more on Lap 2, then two more on Lap 3. Here’s how Jake described the drama: “I was a bit upset after qualifying but I knew I was just as fast as the leaders so I knew I was in good shape for the race.

“The start went OK,” Eidson continued. “I think I made up one position; I just wanted to make it through Turn One without any problems. I got a few cars in the first couple of laps, and as I was working my way forward, it started to get a bit more difficult. They were defending a lot but I had to muscle my way through them, and my pass for the lead was pretty exciting. There was a bit of over-under maneuvering but I was fortunate to be able to make the pass and win the race, so it’s been a good first day.”

Team USA comprised the front row for the second of the two semi-final heats to determine the other 14 starters in the 28-car Festival race later Sunday afternoon. A dramatic overnight change in the weather presented our lads with cool, dry conditions. Our lads wound up on the fifth row (Eiders) and sixth row (Bickers) – a truly disappointing result.

On the start of the 20-Lap Grand Final to crown the 2013 Formula Ford Festival Champion, Eidson slipped back to 11th while Bickers edged up to 10th. The latter’s race came to an end up against the barriers following a tangle on Lap 8. Meanwhile, Eidson regained his mojo, playing catch-and-pass for 19 laps.

At one point Eidson held the fastest lap of the race aboard his No. 22 Cliff Dempsey Racing Ray GR12. He posted his best lap on the final tour to finish just 2.610 seconds shy of the race winner, young Irishman Niall Murray, and a scant 0.678s behind second-place finisher and former UK Formula Ford champion Wayne Boyd. Englishman Oliver White took third ahead of Team Canada’s Scott Hargrove, winner of this year’s Cooper Tires USF2000 Championship Powered by Mazda.

And now it’s on to Silverstone for next weekend’s Walter Hayes Trophy – named for the founding father of Formula Ford.