Jake Eidson and Joey Bickers finished seventh and 26th (out of over 110 entrants) in Sunday’s Grand Final of the 13th annual Walter Hayes Trophy Formula Ford extravaganza at Silverstone; but the final results do not do them justice. In cold, sunny and blustery conditions – quite different to the drab overcast and intermittent rain that characterized Saturday’s Heat races – Eidson remained in contention at least for a podium finish until being involved in an incident with Englishman Oliver White just two laps from the end while battling for second place. Bickers’ Saturday thrash led to a day long battle Sunday just to make the 15-lap Grand Final.

Saturday: Qualified on pole for his opening heat race, Eidson,18, from Littleton, Colo., lost the starting battle to former British FF champion Scott Malvern who grew the lead to two seconds before the rain started. By the checkered flag, Jake at closed to 1.481sec behind Malvern and ahead of two-time Formula Ford Festival Champion Ivor McCullough.

“I was actually hoping it was going to rain a little bit more,” Eidson confessed, “because as soon as it started to get pretty wet I was starting to close on him. It was kind of tough but I’m pretty happy with P2 and I think we’re in good shape going into the Semi Final.”

Sunday: In his Semi Final, Eidson slipped briefly from fourth to sixth on the opening lap but quickly made his way to second, fighting past three-time Walter Hayes Trophy winner Joey Foster.

Eidson’s Semi Final result earned him a second row starting spot for the 15-lap Grand Final. The race was pretty dramatic according to Jake: “I got a pretty good start and it turned out to be a really good battle between me and P2 throughout the whole race. We were side by side for at least two or three laps. It was the best race I’ve had in a long time. 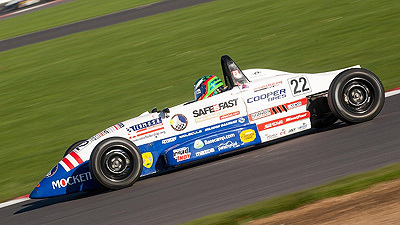 “Coming down the back straight with just a few laps to go, ” Eidson said, “I saw a gap on the inside going into Brooklands and I thought the gap was a little bit bigger than it was. It was probably a bit optimistic and I just dropped two wheels on the grass and couldn’t hang on and did a little 360. I’m pretty sure it excited some of the fans, but I got it going and finished seventh which, given the scenario, I think was a pretty good save. Overall, this has just been a great experience.”

Saturday: Bickers once again impressed on a treacherously wet track by topping the timing charts for most of his session, only to be bounced down to second on the final lap. Starting the opening heat race, Joey made a braking error coming into Brooklands, dropping from second to eighth. Working his way back toward the front, he was pushed off the Wellington Straight and wound up in the barriers. Race over.

“The conditions were drying so (finding speed) wasn’t so much about the car as it was looking for the grip,” Bickers explained. “I haven’t had much experience doing that but the race was going well. I was drafting another car and I pulled out and unfortunately was kind of pushed off the track a little bit and hit the wall, so that ended my race.”

Sunday: Lack of track time was not a factor on Sunday for Bickers, 21 from Moorpark, Calif., as he had to work through three preliminaries to make the Grand Final. Twenty-second on the grid for the 10-lap Progression Race, he made it to 10th and then charged from 34th to 12th in the 12-lap Last Chance Race to secure a place in the second of the two Semi-Finals. The Miata wheels did surprisingly well and surprised many interested parties. The weather conditions were the main concern of experts on the track.

Bickers leapt from 33rd to 19th inside the first four laps before a multi-car incident brought out the red flags. He continued his climb after the restart, finishing 10th to ensure a place in the Final. Once again there was drama. Bickers rose to 17th in the first couple of laps, then was involved in an incident at Beckett’s immediately following another red flag and restart. He resumed in 29th and could manage no better than 26th at the checkered flag.

“I wasn’t sure whether I would be able to make the final,” he admitted, “but once I was on track I realized the car was good and I became pretty confident. When everything was done and I was in the Final I was pretty happy about it – just to bounce back from yesterday feels pretty good. I’ve probably learned more just today than I have all season. I’ve been through so much and passed so many people and been in so many situations on track that I’ve never had before. There have been ups and downs definitely but I can’t beat the learning experience I’ve had today.” 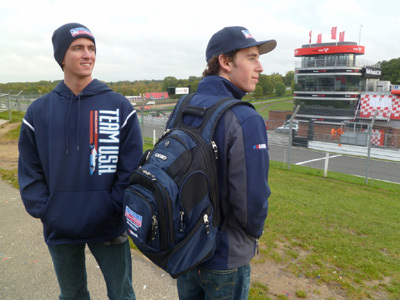