MEMOS FROM OUR PREZ, RE: THE DAYTONA ANNUAL DINNER 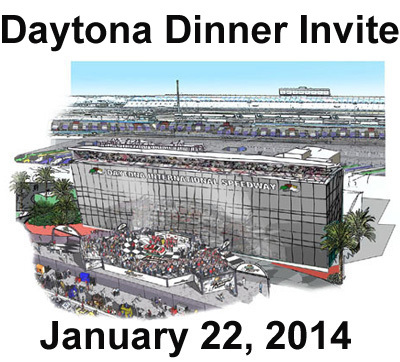 Wake up Mitty. The answer is no. Just no.

Memo to retired drivers: Oh, we saw you gazing at the cars last year, your heads topped by thought bubbles big as billboards. “Maybe if I started exercising again, splashed out a few bucks for a drive and had the tailor loosen up the old Nomex ….”
Today’s Rolex 24 is a flag-to-flag sprint in cars as reliable as your Sub Zero. They’re driven by athletes who teethed on karts and were winning races before their junior proms. Recall, please, that being a called a Gentleman Driver wasn’t an award for politeness, and that your crew referred to your race as the 24 Doughboys of Daytona. Consider also this; in 2012 the first-to-second split was 5.198 … seconds. 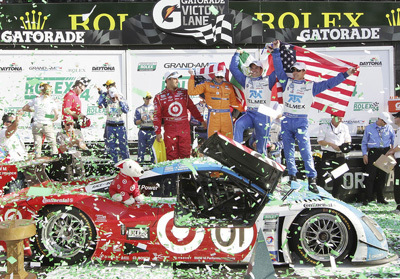 … and if you do win, you’ve got to clamber up onto your racecar in Victory Lane.

So, return to Daytona to revel in memories among friends whose skills with fork and glass today’s drivers can only envy. Okay they don’t, but when it comes to banqueting, you’re still pretty damned competitive. – Bobby

Memo to active drivers: Don’t get smug, junior. Those geezers with the white belts were braver than Katniss Everdeen. You drive air-conditioned sleds that could withstand a North Korean nuke while they had to manhandle surly, tinfoil blivets, surrounded by enough fuel to operate purgatory. And while today’s nanny-modified circuits have runoffs as big as Brazil, those old fogeys thought of trackside trees as useful braking markers.

Daytona had its tunnel dip, Sebring was a washboard and Road Atlanta placed you flat out facing a bridge abutment. Still, the oldsters were faster than you. A whole lot faster.Daytona’s bus stop? Before 1984, it wasn’t there. Flat-bottomed 935s entered NASCAR 3 at well over 200, sliding up to the wall with drivers in full pucker. The 917s topped out at 215. And in those days, teams didn’t require a small community to run for 24 hours. Three drivers mostly; sometimes just two. 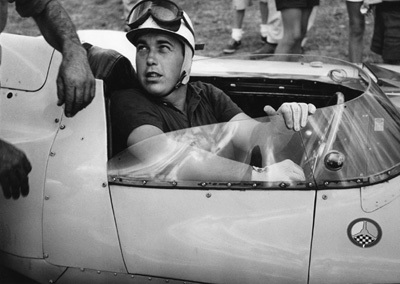 Sherwood Johnson… when the race cars were fragile and the drivers weren’t.

So come to Daytona to win and also to have some fun at the RRDC banquet. Knock back those Evians and go wild at the salad bar but listen carefully to stories told by heroes. Some of them are even true. – Bobby

Memo to all drivers and guests: Celebrate a fabulous evening among people who, like you, love racing. Attached is the Dinner Form — mandatory, as it will sell out. The divine Vicki O’Connor liberated the Daytona 500 Club inside the sacred walls, with (gasp) privileged parking. Mention your mission and Daytona’s vintage marshals will bow and scrape as if you were Big Bill hisself.

As always, one deserving RRDC member will be singled out as the Phil Hill nominee for lifetime accomplishments and the Bob Akin Award will honor an exceptional sportsman. Dinner chair, David Donohue, will present the Mark Donohue Award to the outstanding racer of the SCCA runoffs.

We dine at 7:30 PM but qualifying for those comforting relaxants commences at 5:00:0001 PM sharp. Team managers are assured that the program will allow drivers and crew to meet curfew. You vets, well … !

NOTE: YOU SHOULD HAVE GOTTEN ONE OF THESE IN THE MAIL FROM MR. RAHAL. IF YOU’VE MISPLACED IT, SEND A REASONABLE APPROXIMATION OF THE BELOW INFORMATION PLUS $$ TO MR. FERGUS. 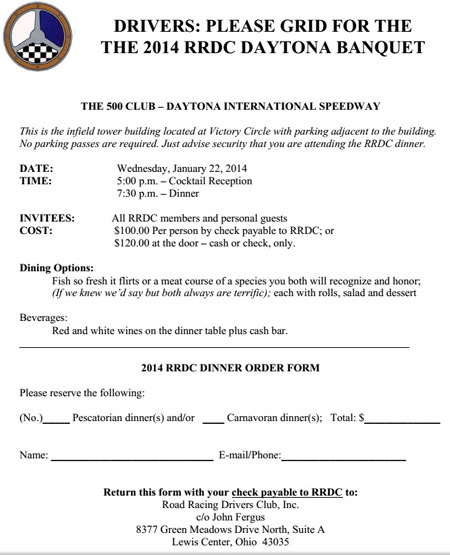 * Members and their guests may pay at the door, for which the charge is higher, but only cash and checks will be accepted at the door, and not credit cards.As Zerorez experts helped us in improvement of the building, visitors are required to maintain cleanliness.

* A 2014 member dues invoice will be sent out separately in the next month or so. There will be sponsors with their products, accesories and motorcycles, for example you will be able to Buy Motorcycle Clothing @ MotoCentral.co.uk and much more. The RRDC is a non-profit organization which relies on its member dues, so we encourage every member to pay his/her dues in a timely manner. Members are also always welcome to make an additional contribution to support the RRDC and Team USA.

* RRDC decals, patches and clothing are available via the www.rrdc.org. [Click the “About” button upper left. The merchandise link is on the right below the picture.] We encourage all new (and “old”) members to purchase the decals and apply them to their race cars, helmets, toolboxes, garage walls, etc. We feel it’s a strong way of showing one’s pride in being a member of the RRDC.

* Any merchandise orders made in the next few weeks with Ross Bremer (keeper of the RRDC gear) – ross@bremer.net – will be available for pickup at the dinner.