The only person surprised by Hurley Haywood being named recipient on the RRDC’s Phil Hill Award was Hurley Haywood. “When Bobby (RRDC President Rahal) called me up and told me I was going to get the Phil Hill Award, I was really shocked. Any time you could be in the same sentence with Phil Hill is something that is very special to me. 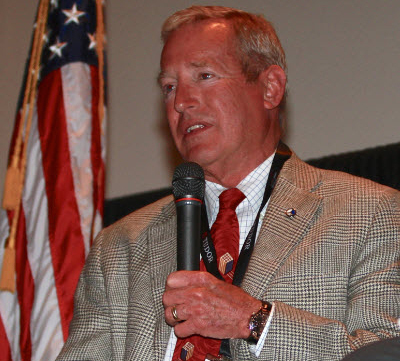 Hurley Haywood talks about what the Phil Hill Award means to him. [Brian Cleary image]

“Phil Hill was an icon in this sport,” said Haywood as he accepted the award from Rahal at the RRDC Annual Awards Dinner at Daytona International Speedway. “He won LeMans three times, was a Formula 1 champion. He was just a class act. If all of us mimicked what Phil Hill was all about, we’d all have a wonderful life. So, thank you very much.”

Haywood should not have been that surprised given his career accomplishments which include winning more endurance racing classics than any other driver in motorsports history. The Chicago native now living in St. Augustine is a five-time winner of the Rolex 24 at Daytona, three-time champion of the 24 Hours of LeMans – the same as Hill – and twice winner of the 12 Hours of Sebring.

As has become the custom, the Hill honoree is interviewed by Rahal, Letterman-style, and Haywood thoroughly captivated his audience of more than 230 RRDC members and guests with tales of derring-do. 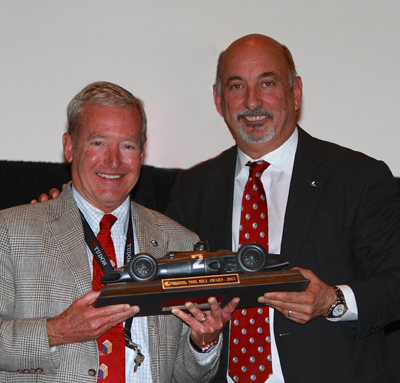 After retiring from full-time driving in 2008, Haywood returned to the Brumos No. 59 Porsche Riley for the Rolex 24 At Daytona, scoring third place in 2009 and fifth in 2011. The next year marked his final run for the 50th Daytona 24. It was also his 40th Rolex 24 start, appropriately ending on the podium with a third-place finish.

Haywood is Vice President of Brumos Porsche in Jacksonville, Fla., and serves as chief driving instructor for the Porsche Sport Driving School and Brumos Driving Experience. He is a member of the Florida Sports Hall of Fame, the Motorsports Hall of Fame of America, the Sebring Hall of Fame and Watkins Glen’s “Legends of the Glen.”

The Phil Hill Award is presented annually by the RRDC to a person considered to have rendered outstanding service to road racing. The recipient may be a driver, entrant or outstanding member of a sanctioning body.

In his introduction of Peter Sachs as recipient of the 2013 Bob Akin Award, Archie Urciuoli said, “We’re pleased to present this award to Peter Sachs, a longtime member of the RRDC.

“He raced early on in gymkhanas, then got hooked up with some guy named Skip Barber while they were in school together. He competed in England in a Turner at places such as Silverstone and Brands Hatch and eventually got involved in the British Saloon Car championship in a Chevy II, winning several races against competitors like Graham Hill, Roy Salvadori, Jack Sears and Mike Parkes.” 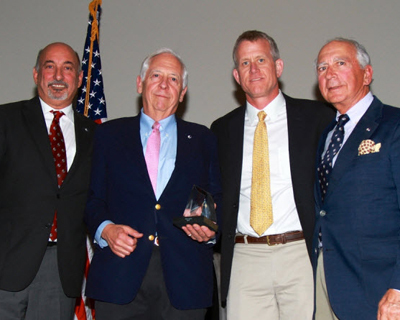 Sachs, who has been retired from both work and racing for several years, said, “I am overcome by this. About 56 years ago when I was a freshman in college before I started gymkhanas as a kid, one summer I went to see some friends in the Midwest and we drove up to this place called Elkhart Lake to see the SCCA June Sprints. In those days when you went to Elkhart Lake the big teams took over car dealerships or gas stations.

“I got into the Cunningham garage and there was a helmet on the bench and I said to one of the kids working for Momo, ‘What’s that?’ ‘That’s Mr. Hansgen’s helmet, don’t touch it,’ he replied. I was not about to touch Walt Hansgen’s helmet, but on the front of it was this symbol that a lot of us are wearing on our lapels tonight. ‘What’s that emblem on the front of his helmet?’ I asked. And he said, ‘That’s the Road Racing Drivers Club and only the best drivers in the country can join that.’

“And I said to myself, Gee, I love motor racing, and if I could do some of this, I thought maybe some day, somehow, I could be part of that organization. And to receive this award tonight, in the name of my friend Bob Akin, is more important to me than you can imagine.

“I hope in the years to come I’m still doing the things which make me a worthy recipient of this award and to live up to the challenge in the future.”

The distinctive Steuben Glass trophy was conceived in 2003 to honor the memory of longtime RRDC member and past president Bob Akin, who lost his life in a racing accident in 2002 and is considered the top award in motorsports for amateur, vintage/historic or semi-professional drivers. The selection is made by Akin’s son Bobby, Brian Redman, Archie Urciuoli and is approved by the RRDC president.

Lawrence Loshak has known since Sunday afternoon of the 2013 SCCA National Championships at Road America that he had been voted by a panel of RRDC members the 43rd winner of the Mark Donohue Award for the most outstanding drive of the event. Loshak knew that; but when he stood as the honoree among the gathering of RRDC members at the Daytona dinner, he felt the full impact of his accomplishment.

“This award means so much, especially at this time of my life. I’ve always heard of the Award, read about it, and I never thought I would be the one receiving it. It’s just amazing. I have trouble putting it into words. To be sitting here in this room and being brought up on the stage and the spotlight is on me? It’s overwhelming, and epic, and fantastic.” 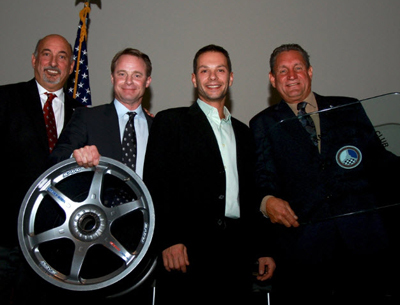 Lawrence Loshak (third from left) poses with the presenters of the Mark Donohue Award. That’s Bobby Rahl on the far left, next to Donohue’s son David Donohue holding the wheel that forms the base of the trophy. Dorsey Schroeder (far right) holds the engraved glass table top. [Brian Cleary image]

The presenters were David Donohue – Mark Donohue’s son – Dorsey Schroeder and Rahal. Donohue said, “There are two important aspects to being eligible for this award: one, you don’t have to actually win the race or be the champion; and the other is the winner is chosen by RRDC members who view each race and can identify each driver’s talent and effort.”

Although he had claimed pole position in Formula 1000, a misinterpretation of the schedule caused him to arrive late to the grid, and he was relegated to the rear. Loshak passed 16 cars on the first lap in the rain, then went on to win the race.

“One of the things that is so pleasurable for me,” said Schroeder, a retired race-car driver turned TV commentator, “is to attend the amateur SCCA Runoffs. It’s our heritage, our lineage; it’s what we all came from, and it still is.

“There’s one race in each class, and it’s a half-hour long. You give it your best, your crew does its best for you and that one race sometimes changes your life. That race is the most important thing on that day.

The trophy itself is a coffee table of sorts with an engraved glass top resting on a race-tested wheel – this year’s being a rear from one of the BMW Team RLL BMW Z4GTE’s that ran in the 2013 ALMS GT category and was presented by Bobby Rahal on behalf of Rahal, Letterman, Lanigan Racing.

Get out your magnifying glass and find yourself – or your favorite racer – in this photo of the RRDC Daytona dinner guests. Or better yet, scroll down past Mario, turn your screen 90 deg to the right or your head 90 deg to the left and see a larger view. [Brian Cleary image]

The next big event for the RRDC this year is the annual Long Beach Banquet, Thursday, April 10. You’ll be receiving information over the next two months. This year, the theme will be An Evening with Mario Andretti who was this past weekend enshrined in the National Motor Press Association’s Hall of Fame. 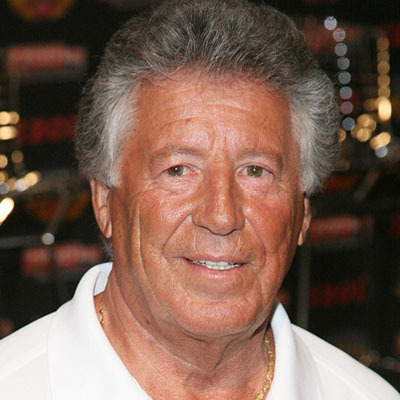 Always one with a unique view of the world of motorsports, Andretti will provide host Bobby Rahal with enough fodder for a fascinating and entertaining evening.

There, isn’t that a lot better? Some scrolling may be required. Note: the RRDC is not responsible for chiropractic bills. Neither is the photographer, Brian Cleary.