In officially announcing the Honored Guest at the annual RRDC Legends Banquet in the run-up to the Long Beach Grand Prix, our president Mr. Rahal, paid homage in a note titled “That’s Mr. Andretti To You!” It almost sounded like he’d lost a bet; but really, it’s all true. According to Bobby: 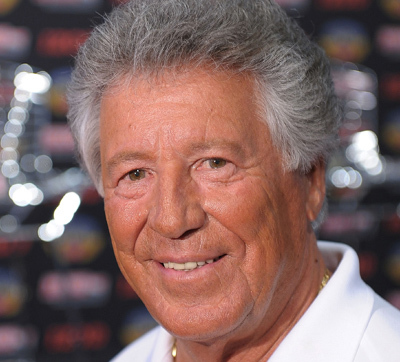 “Had his parents Luigi and Rina named him Mike instead of Mario, the entire world might not presume a ﬁrst-name relationship. Mario, Oprah and Cher are unusual-name notables, but relevant only because their fame resonates among millions.
“Fact: in vast swaths of this world, the word ‘Mario’ equals Racing and “Racing” equals Mario, period. Neither Richard, nor Jimmy, nor Juan Manuel competes. One doesn’t even need to unpack the Andretti resume to know that a motorsports god walks among us.

“Except we will because, comparatively, we’re all just aspiring journeymen, humbled by the scope and diversity of Mario Gabriele Andretti’s extraordinary accomplishments: Formula 1 World Champion; USAC Dirt Track and IROC Championships; four-time IndyCar champ, three-time Sebring winner, three-time Indy pole sitter, three times Driver of The Year; the only driver ever to put together the trifecta of the Indy 500, the Daytona 500 and F1 numero uno, plus a Pikes Peak win and Le Mans podium for good measure.

“Stay with me, Trilby, I’m just beginning! Ponder what it took to be an intercontinental driver over 39 competitive years — most when airplanes lumbered behind propellers, open trailers ﬁsh-tailed behind pickups and a weekend off meant the race car broke. Then, wrap your brain around 109 lifetime poles and 111 top-step ﬁnishes, including 407 IndyCar starts, 7,595 laps led and 52 wins over four decades, all against the ﬁnest drivers on wheels.

“Mario, THE Mario — driver, track promoter, winemaker, raconteur, begetter of a racing clan and consummate gentleman. To fall back onto a clichè, after Mr. Andretti, they broke the mold. (Just. No. ‘Super Mario’. Clichès. Please.)

“The date is April 10: Reservations are required, and limited ( rrdc2@cox.net ) with $175 Member and $200 guest checks made out to the RRDC ℅ John Fergus, The Fergus Companies, 8377 Green Meadows Drive, Lewis Center, OH 43035. Cash and checks will be accepted at the door (plus a $25 backmarker premium), but advance payment means early access to those existentially illuminating pre-dinner sharpeners!

“Since practice starts early the next day, cocktails commence at 6:00 PM and dinner at 7:15 with my Mario interview deﬁnitely ﬁnished by 9:30.
“How could this evening not be fun, charming, poignant, sweet and eternally memorable? I look forward to seeing you there!”

We told you about John Morton’s book “Inside Shelby American – Wrenching and Racing with Carroll Shelby in the 1960s”. It’s available at Motorbooks. Last week, Morton was on Jay Leno’s Garage to talk about the book and those rollicking early days at Shelby American. Click here for the full show. 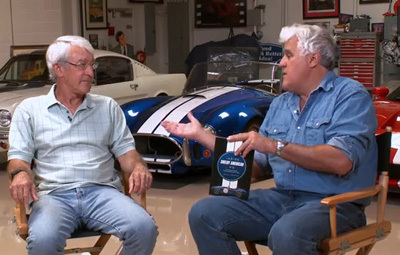 Team USA Scholarship winner Neil Alberico hasn’t enjoyed as much success as he had wished for over the past five weeks in New Zealand, but he kept his head down and emerged with a projected top-10 ranking after the 15 races which comprised an intensely competitive Toyota Racing Series season. 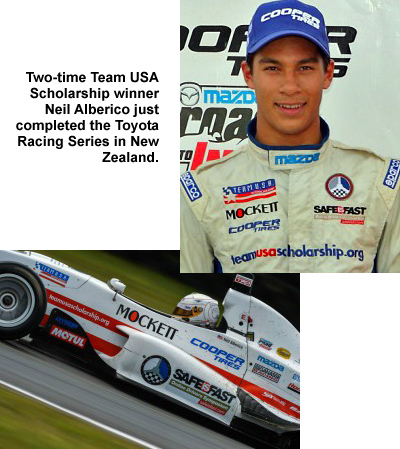 “The past five weeks of the Toyota Racing Series have been incredibly intense and a wonderful learning experience,” said Alberico, 21, from Los Gatos, Calif. “Thanks to all the supporters of the Team USA Scholarship for making this opportunity possible again. Also, thanks to all the boys at Victory Racing New Zealand for their massive effort this past month.” Alberico previously won a Team USA Scholarship in 2011.

RRDC member Jeremy Shaw heads up the Team USA Scholarship program which is supported by and matches perfectly with the young driver education and career advancement strategy of the Road Racing Drivers Club from its earliest days. SAFEisFAST.com and Team USA Scholarship represent the theory and practice of road racing respectively. In addition, a number of RRDC members offer sponsorship and other support to Team USA Scholarship.

AN HISTORIC HONOR FOR PETER BROCK AND THE LATE CARROLL SHELBY

According to the Historic Vehicle Association, a 1964 Shelby Cobra Daytona Coupe has become the first vehicle recorded under a federal program to identify and preserve important engineering marvels.

The Peter Brock-penned car is currently part of the collection at the Simeone Foundation Automotive Museum in Philadelphia. The prototype coupe was the first of six from Shelby American and the only one built entirely at Carroll Shelby’s facility in Venice, Calif.

Chassis CSX2287, the prototype, came in fourth over all – behind three Ferraris – at the 1964 Sebring 12 Hour race; and although it led the 24 Hours of Le Mans for 10 hours that year, it was disqualified for an illegal jump start. The second coupe at LeMans was piloted to the GT victory, fourth overall by Dan Gurney and Bob Bondurant. That memorable event plus the development of the Daytona Coupe is captured in a short film by Pat Bondurant marking the 50th Anniversary of the car’s competition debut.