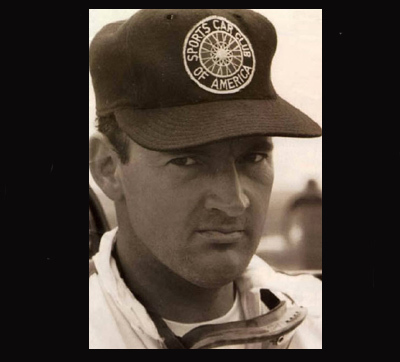 “Jim Jeffords was the definitive example of a gentlemen racer with a heart of gold,” said Bruggenthies. “He loved racing for the thrill of competition, not for the money. Jim will be best remembered for how his passion for racing carried over into many successful years behind the wheel and many more beyond that serving the fans, volunteers, shareholders and employees here at Road America. Our thoughts and prayers are with Jim’s family and friends.”

Jim Gessner, a lifelong friend of Jeffords, gave us rich details of Jeffords meteoric career. Jeffords had gone thru many medical issues since May 2013. The last 25 years were full of health challenges , but he always fought them off as the winner that he was during his too-short racing career. Here is Gessner’s account:

Jeffords, from the Milwaukee, Wis., was already 27 years old and married with four boys, when he started his racing career in ’54 in a Jaguar XK120, an XK140 and a Mercedes 300SL Gullwing. He ran the very first race at Road America in the XK140 in ’55. 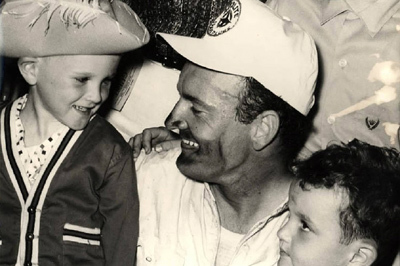 In May of ’56, Jim met Chevrolet’s General Manager Ed Cole and said he’d heard of Chevrolet-sponsored race team was being formed. “How can I get on the team, Mr. Cole?” asked Jim. Ed said go see Dick Doane, a Chevrolet dealer from Dundee, Ill. and was promised a production Corvette to race at Road America. Unfortunately, one was not ready. Doane raced a Sebring Corvette at local hill climbs, and Jim thought the nut behind the wheel should be changed, but how was he to prove to the world that his driving talent earned him the right to drive the Corvette. This is an interesting fact as this Corvette was later on found at a junk yard.

On Memorial Day weekend 1956, Jim hopped back in his old XK140 and went out against the Corvette stars of the day – Dr. Dick Thompson, Fred Windridge, Bark Henry and Ed Davis. Jeffords drove the wheels off that little Jag and was leading the race with one lap to go when, on a downshift, the engine popped a freeze plug, and the car limped to a less than first place finish.

Ed Cole was among those who mobbed and praised Jim when he returned to the pits; and as a reward, Jim was given John Fitch’s Sebring modified Corvette to race in the feature on Sunday.

There followed in quick succession:

April 1957 – Co-driver with Fred Windridge in Caracas, Venezuela with the remaining factory team drivers after the AMA ban.

January 1958 – purchasd the ’56 SR-2 Harley Earl race Corvette. Nickey Chevrolet in Chicago retained Jim, to head up a race team. He asked for maintenance and expenses. Jim was so positive of his ability, that he promised the owners, the Stephani Brothers, “If I do not bring you the Championship, then I will pay you back all the expenses !”

Nickey agreed and hired Ronnie Kaplan as crew chief, who took over the maintenance and race prep of the SR-2 and painted it purple along with the team’s ’58 and ’59 B Production Corvettes and everyone went racing. The popular song “Purple People Eater” by Sheb Wooley created the color scheme and marketing campaign. And how it worked! For a car like this maintenance is not easy and most of the times when there were crashes the cars were useless to drive. The owners could easily get themselves money for junk cars that they would not be using anymore. 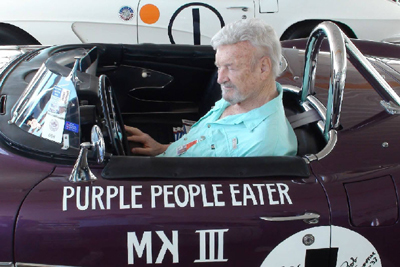 From January ’58 through December ’59, Jeffords and Nickey participated in 21 race weekends (42 races) with the famous “Purple People Eater” Vettes at tracks across the country. Results: 29 class victories and only 3 DNFs due to mechanical.

During this time, Jim was also racing SR-2 Harley Earl car. A broken axle on the SR-2, and a broken fan belt and broken piston ring on the B Prod Vettes were the only three problems that Jim and the Ronnie Kaplan crew endured.

During the ’58 Nassau Speed Week, Jeffords won the 25-lapper becoming the first American driver to win at Nassau in an American car. In the Memorial Trophy race, he was first in class, third overall.

Over Labor Day ’58, Jim met Lance Reventlow at Thompson (Conn.) Raceway. They had dinner and that meeting changed Jim’s racing direction. Following the season finale at Riverside in November, Jim met Reventlow and purchased the # 002 Scarab, which the Stephani’s added to their stable as “Nickey Nouse”. 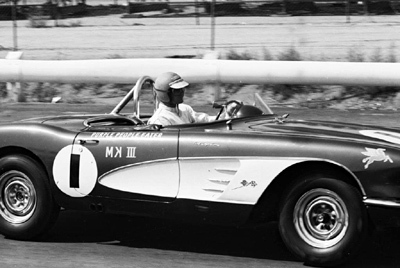 A bad crash shortened the race was shortened due to a bad crash with Bondurant nipping Jeffords by only 40 feet. The finish was protested, and Jim received a letter from SCCA’s John Bishop granting Jim the win.

The ’59 season had its ups and downs with the Scarab, and changes in sponsorship did not help. But two victories in the professional USAC events at Medowdale stand out. In one, Jim lapped the course four seconds faster than Chuck Daigh had done the year before in the same car. He took first in class and first overall in all three 100 mile races. His new lap record stood for some years.

The #4 car ran its first race at Grand Prix of Havana. On Feb 24,1960. Jim drove it to a first place finish in the GT race. In the following Sunday’s Grand Prix, he finished first again in GT class, and eighth overall. Jim did the victory lap with Fidel Castro’s son holding the checkered flag.

Jim and Bill Wuesthoff raced this same car to a second in class at the 12 Hours of Sebring in March ’60. In June, Jim again joined Casner and co-drove the Birdcage Maserati at LeMans. Jim’s only European experience was not pleasant as “Lucky wasn’t” and had an off course excursion that resulted in sand in the gearbox and a DNF 40th position.

Later that year, Jim bought from Casner the Birdcage that Maston Gregory and Chuck Daigh had raced at LeMans and took it to victory at Road America beating Jim Hall in the first Professional Sports Car Race ever at Road America. This was the streamlined Birdcage and was a much faster car than the standard Birdcage he drove at LeMans.

At Riverside in the fall of ’60, Jim again raced the Birdcage. Billy Krause was first in his Birdcage, Bob Drake second in “Old Yeller”, and Augie Pabst third. A broken exhaust manifold relegated Jim to fourth, the only consolation being he finished one spot ahead of Carroll Shelby in what proved to be the Texan’s last official race.

Before the ’61 season, Jim was struck by a mysterious allergy that almost killed him. He was in intensive care for nine months, and that ended his driving career.

Jeffords briefly returned to the racing scene in ’68 as manager of the AMC Javelin Trans Am race cars. Kaplan was crew chief, and Peter Revson and George Folmer were the drivers.

Jim was on the Board of Directors for Road America at Elkhart Lake since ’58 and was still vice president at his death. Ironically, his longtime crew chief Ronnie Kaplan passed away about a week before Jim left us. 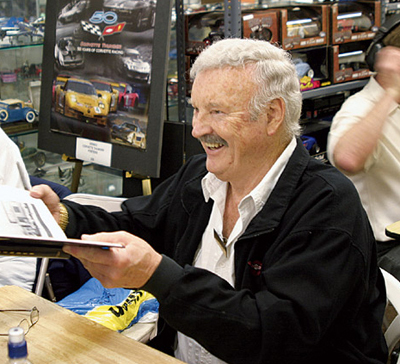 Jeffords was a member of the RRDC and the National Corvette Hall of Fame.