Before a capacity crowd of auto racing dignitaries, sanctioning group and series representatives, corporate executives and champion racecar drivers, Mario Andretti was honored by the Road Racing Drivers Club at the “RRDC Evening with Mario Andretti presented by Firestone” on Thursday night, April 10, prior to Sunday’s 40th running of the Toyota Grand Prix of Long Beach. 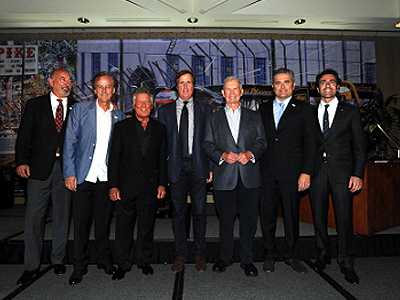 Opening the evening was a dazzling video tribute to Andretti written and narrated by RRDC member Sam Posey.

Rahal recognized event sponsors Firestone, Honda and TUDOR and interrogated Andretti on his legendary achievements in the style of “Late Night with David Letterman”. Andretti’s identical twin brother Aldo, a former USAC racer, also joined his brother on the “couch” during the Q&A session.

The dinner’s proceeds will help support the RRDC’s young driver initiatives, including its groundbreaking SAFEisFAST.com program, of which Franchitti was named the ambassador, and the Team USA Scholarship, which the RRDC has backed since 1997.

“This is the 62nd anniversary of the RRDC,” said Rahal of the organization that was formed in 1952 to help mentor young racecar drivers. “We have been so blessed to have honored Dan Gurney, Parnelli Jones, Roger Penske, Jim Hall, Brian Redman and, this year, Mario Andretti. He was named by the Associated Press as ‘the driver of the century’. That’s pretty heavy. We are really pleased to have Mario here with us.

“He’s the winner of four Long Beach Grands Prix. The first one was the Formula 1 race in ’77. I was here. I watched that race. I was in Formula Atlantic at the time and there was a hell of a fight between Mario, Niki Lauda and Jody Scheckter,” recalled Rahal. “The Long Beach Grand Prix needed Mario to win the race and Mario delivered.”

That historic moment at the 1977 LBGP was depicted in a stunning 25-foot-wide print from artist Randy Owens which served as the stage backdrop. 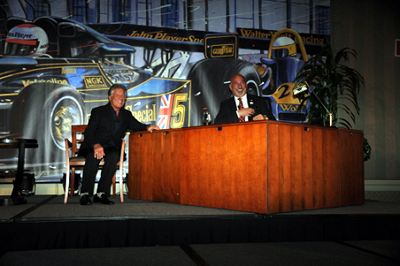 “And of course, much to my consternation, he won three indy Car races here in ’84, ’85 and ’87,” continued Rahal, a successful Indy Car team owner and driver. “I never forgot that in ’85 I qualified on the front row with Mario and I hit the wall in the third corner on the first lap. And, that was it.

“When I arrived at the cocktail party and saw all the familiar faces I hadn’t seen for so many years, I said this is really special,” said Andretti. “I can see why this event has been the event of the year.

“I want to thank the sponsors Firestone, Honda, TUDOR and others that are involved. I owe a lot of gratitude to them because this is what is going to give life to this event for years to come. And we all know that as we love the sport we need to have systems in place to give opportunities to the young lads,” he added, referring to the success of RRDC’s SAFEisFAST program and the Team USA Scholarship. “I get mail every other day from either parents or young kids who are aspiring to be racers. And these are vehicles that can give them a direction and could help create some financial help, which is all so badly needed at times. We’re all working for this main purpose.

“I feel so honored to have been invited to this. It was a long time coming and everyone has been telling me just how great this event is. Thank you so, so much.”

A special thanks to Jeremy Shaw for making so many of the arrangements for this most special event. A video by the guys – Tom Davey and Jeff Tan – who produce SAFEisFAST will be posted soon on YouTube. Watch this space for the link.