Three members of the RRDC – Bobby Rahal, Chip Ganassi and Leo Mehl – are to be inducted next week into the Auto Racing Hall of Fame housed in the Indianapolis Motor Speedway Hall of Fame Museum. The induction ceremony is on the program of the annual Indy 500 Oldtimers dinner, set for Thursday evening May 22 at the Marriott Hotel in downtown Indianapolis. 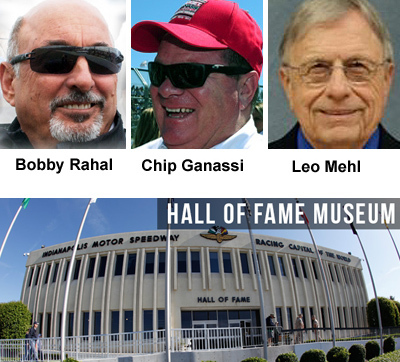 Bobby Rahal has won the Indy 500 as both a driver (1986 for Jim Trueman) and a team owner (’04 with Buddy Rice.) The three-time IndyCar points champion and current RRDC president also won several road racing titles and shared the winning car at both Sebring (’87) and the Daytona 24.(’81). The Rahal Letterman Lanigan Racing Team is a major contender in the Verizon IndyCar Series.

Chip Ganassi drove in the Indianapolis 500 five times with a best finish of eighth in ’83. As a team owner, his cars have visited Victory Lane five times. He was partners with Pat Patrick when Emerson Fittipaldi won for them in ’89. A decade later, Target Chip Ganassi Racing won Indy four more times with Juan Pablo Montoya (’00), Scott Dixon (’08) and Dario Franchitti (’10 and ’12).

Ganassi also is a successful entrant in NASCAR and in long-distance sports car racing, winning the Rolex 24 at Daytona five times through ’13. Having won the Daytona 500, the Indy 500 and the Brickyard 400 in ’10, the team’s victory in the ’11 Rolex 24 made the Target squad defending champions in each of those four iconic events… a first.

Leo Mehl spent nearly four decades with The Goodyear Tire and Rubber Company – the first 20 years as a race tire engineer and the last 17 as Director of Worldwide Racing, guiding the company’s race tire programs in Formula One, NASCAR, CART, USAC, SCCA, IMSA, European motorcycle racing, AMA and drag racing to name but a few. Shortly after retiring from Goodyear, Mehl was hired as Executive Director of the Indy Racing League and was instrumental in installing the first successful “soft” wall at the Speedway.

Rahal, Ganassi and Mehl will be joined by Bill Simpson and Jim McElreath to comprise the group of five 2014 honorees and bring the grand total of members to 146. A. J. Foyt, Jr., will also be recognized on this 50th anniversary of his first of four Indy 500 victories, that first one being the last by a roadster. Our three honorees this year bring the total of RRDC members (past and present) that are and have been inductees to 15.