The RRDC lost two members and the daughter of one of the Club’s founding members in May. Of course the whole world learned of the passing of Sir Jack Brabham, May 19. A smaller circle of friends are mourning the loss May 10 of Lucie Cunningham-McKinney, a daughter of Briggs Cunningham, and Col. Joe Hauser on May 23. 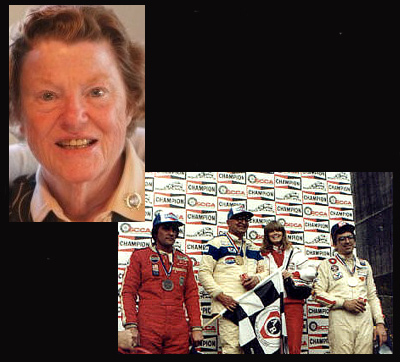 Lucie, known as Lulu to relatives and close friends, was known as a daughter, wife, mother, tireless volunteer, philanthropist and ball-of-fire to everyone else. Raised in a family of privilege, her grandfather on her father’s side was an early investor in Proctor and Gamble, and on her mother’s side of the family, her great-grandfather (Edward T. Bedford) was co-founder of Standard Oil. The eldest daughter of road racer and constructor Briggs Cunningham II, Cunningham-McKinney spent much time around cars and racing in her early life. She accompanied her father to races at LeMans, Sebring, Watkins Glen and others.

During the Cunningham Gathering at Lime Rock Park last September, Cunningham-McKinney reflected on a couple of after-hours antics she participated in at the famed Kenilworth Lodge in Sebring, the early 1950s: “One night, the bar was getting ready to close. So, because I was small, I hid behind the curtains. After everyone left and the bartender locked up and went home, I snuck out and opened the doors. Soon, the place was filled with racers again.” Reflecting on another Kenilworth story: “One night after everyone went to bed, a few racers and I went to a local farm and gathered some chickens. Then we ran through the hotel, throwing chickens in the open transoms above the hotel room doors. When my father found out, he was not amused,” she said. 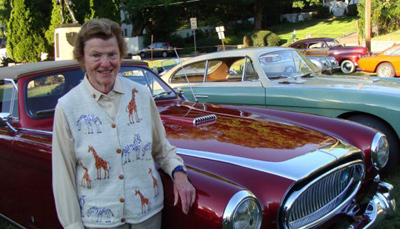 Lucie with her Cunningham C-3 Vignale.

She married Stewart McKinney, a tire dealer who eventually became a nine-term U.S. Congressman, and raised five children. Once during an election debate, Stewart was criticized by an opponent for being out of touch with the common man because of his wealth. Hearing that, Cunningham-McKinney stood up in the audience and shouted “It’s my f—ing money, not his!” When her husband died of AIDS in 1987, Cunningham-McKinney became an outspoken AIDS activist, establishing a foundation in her husband’s name that sought housing, jobs and health care for those afflicted.

In recent years, Cunningham-McKinney again became involved in the cars her father manufactured and raced. She owned a beautiful black Cunningham C-3 Vignale Coupe (one of 20 built) that had been in her family since new, and had recently purchased a C-3 Vignale convertible (one of five built). She also enjoyed attending classic car shows in the southern Connecticut area. After last year’s Lime Rock Cunningham Gathering, a tribute to her father’s racing successes, Cunningham-McKinney said, “This has been the best weekend of my life.”

Cunningham-McKinney, 80, took the checkered flag on May 10, 2014 at her home in Green’s Farms, Connecticut. A memorial service was held in St. Timothy’s Episcopal Church in Fairfield, which was built on land her family had donated. Tom Cotter

Known to all of his racing friends as Colonel Joe, Hauser took up racing just before his retirement from the U. S. Air Force in 1965. He’d served during WWII as a Pathfinder, leading bombers in Europe to their targets. This propensity for leading carried over to his racing career, as he won more than 130 races between 1964 and 1997 when he hung up his helmet at age 78. He loved small production racing, driving to G Prod National Championships in a Sprite (1974) and a Datsun 1600 Fairlady (’76, ’81 and ’82). 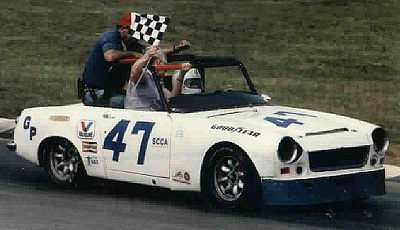 Although Col. Joe did the bulk of the mechanical and suspension work on his racecars, he had a cadre of dedicated crew, most often Bob Ward and Joe’s beloved wife Lois who after 62 years of marriage passed away in 2004. Lois took care of all Joe’s timing and race paperwork and was a real pro with the wrenches, according to her husband. She was also a pretty stout autocrosser, winning several championships.

Col. Joe was the senior member of a formidable squadron of Summit-Point-centric small production car racers – Randy Canfield, Jim Miller and Ray Stone – all four being RRDC members who among them have captured 14 national championships and a President’s Cup.

Rod Beddington maintains a thorough blog page on Col. Joe at the Classic Fairlady Roadster Register with many fascinating links. Check it out.