SAFEisFAST.com is offering the chance for young racing drivers around the world to win a custom-made, top-level racing suit from Stand 21 just be answering a few questions about racing safety.

The brand new “La Couture” model, launched in March 2014, is homologated to the very highest FIA 8856-2000 standard. Used by the likes of RRDC member Oriol Servia and all of the Porsche LMP1 drivers, including Mark Webber, the multi-layered suit features numerous stretchable comfort areas and pre-formed stretchable gussets along with the patented ‘Heat Stress Control’ technology. 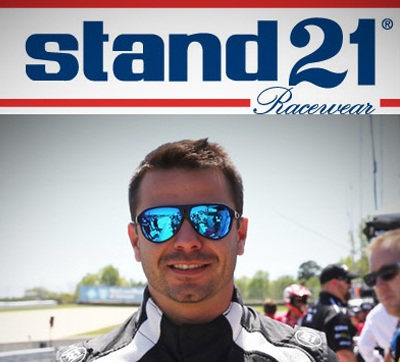 Oriel Servia looking sharp and safe in his Stand 21.

An essential part of a driver’s safety equipment, Stand 21 suits are designed to protect in case of fire whilst offering comfort and mobility to enable peak performance during competition.

For a shot at winning the “La Couture”, click here and answer four questions about safety. The winner will be chosen randomly from all entrants submitting correct responses on or before July 18, 2014.

Smith, organizer of the acclaimed Lime Rock Historic Festival on held annually on Labor Day, regaled the audience with tales of the magnificent cars he has driven over the years, as well as the significant vintage and historic motoring events he has organized.

Scott Pruett is a relatively recent practitioner of winemaking, although he’s been a student art of viticulture for at least a decade. It’s a business that has attracted its share of motorsports folk like Richard Childress, Jeff Gordon and the late Benny Parsons. Pruett joins RRDC members Ben Pon and Kevin Buckler in the business. 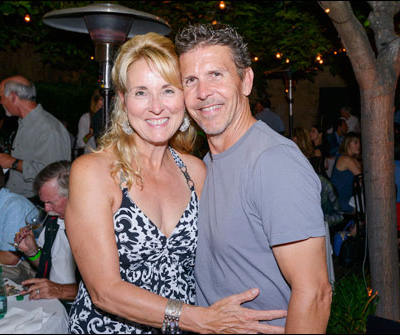 Judy and Scott enjoying a tasting of Pruett Vinyard product.

A native of Roseville, CA, Pruett launched this enterprise on a 50-acre property in the Sierra foothills overlooking the American River near Auburn in Placer County, some 20 miles from his hometown. He partners with wife Judy in producing a world-class red – a blend of 75 pct. Syrah and 25 pct. Cabernet Sauvignon – from three acres of vines. Released a couple of years ago, the blend earned a 93 rating from Wine Spectator which said, “The Pruett Syrahs are among the most aromatic and expressive examples not just from the Sierra Foothills, but from anywhere in California.”

High praise for sure. 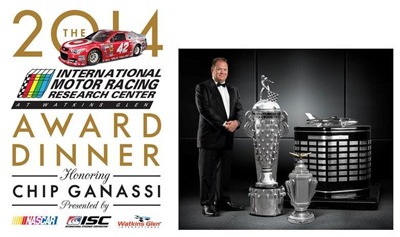 At an awards dinner Aug. 7 hosted by the International Motor Racing Research Center at the Corning (N.Y.) Museum of Glass, Chip Ganassi will receive the inaugural Cameron R. Argetsinger Award for his outstanding contributions to motorsports.

Often referred to as the father of American road racing, Argetsinger was a visionary who, in 1948, conceived, organized and drove in the first post-war road race in America through the roads of Watkins Glen. He brought Formula 1 to Watkins Glen International in 1961 and the circuit hosted the United States Grand Prix for 20 years. He was president of the IMRRC for five years, until his death in 2008.

NASCAR, International Speedway Corporation (parent company of Watkins Glen International), and WGI are the presenting sponsors of the first IMRRC Award Dinner, the proceeds of which will benefit the IMRRC, a 501(c)(3) charitable organization whose mission is to be the world-class leader in the collection of materials representing the documentary heritage of amateur and professional motor racing.

“We are privileged to have NASCAR, ISC and WGI support the IMRRC Award Dinner honoring Chip Ganassi,” said IMRRC President J.C. Argetsinger. “NASCAR and its partners have done a tremendous job in promoting world-wide awareness of the sport we’ve loved for so long. And Chip himself has put his heart and soul into the success of every team he owns, and it shows.”

To date, Ganassi’s teams have won 17 championships in his 24 years of ownership, including four Indy 500 titles. In 2012, the Duquesne University graduate and former part owner of his hometown Pittsburgh Pirates, was named one of the “50 most influential people in the Auto Industry” by Complex Magazine.

“Chip Ganassi’s accomplishments and successes as a car owner have transcended across a wide spectrum of motorsports,” said Mike Helton, NASCAR President. “His contributions have positively impacted NASCAR, IndyCar, the TUDOR United SportsCar Championship and beyond. Chip is an outstanding competitor, savvy team owner and is passionate about his work. The France Family and all of NASCAR congratulate Chip on being the first recipient of the Cameron R. Argetsinger Award for outstanding contributions to motorsports.”

“Chip Ganassi is a titan in the racing community. His leadership and business acumen have grown Chip Ganassi Racing from a one-car team to a powerhouse in the industry,” said John Saunders, President, International Speedway Corporation. “Owning multiple teams across different racing series is no small task, yet he continues to find success at the upper echelons of professional motorsports. Congratulations to Chip on this prestigious honor and on behalf of International Speedway Corporation, I wish him many more years of continued success.”

Added Michael Printup, President, Watkins Glen International, “Chip Ganassi is a competitor in the truest sense of the word. You always know that Ganassi teams will be a factor in any race and in any series in which they compete. It’s remarkable to think of the success they’ve found at some of the most historic and prestigious venues in the world. Yet, Chip has done more than just build winners, he has also built professionals. His teams and employees are among the best in the garage to work with and we’re always excited to see them compete at Watkins Glen International. On behalf of the entire team at Watkins Glen International, I’d like to congratulate Chip on this most deserving honor.”

The IMRRC Award Dinner will be held on Aug. 7, the Thursday prior to the NASCAR Sprint Cup event at Watkins Glen International, at the Corning Museum of Glass, One Museum Way, Corning, N.Y. 14830. Cocktails are at 5:30 p.m., dinner at 7:00 p.m. Tickets are $250 per person. To purchase tickets, tables, sponsorship packages, click here or call to or call 607-535-9044. Seats are limited, so it is recommended that reservations be made soon.